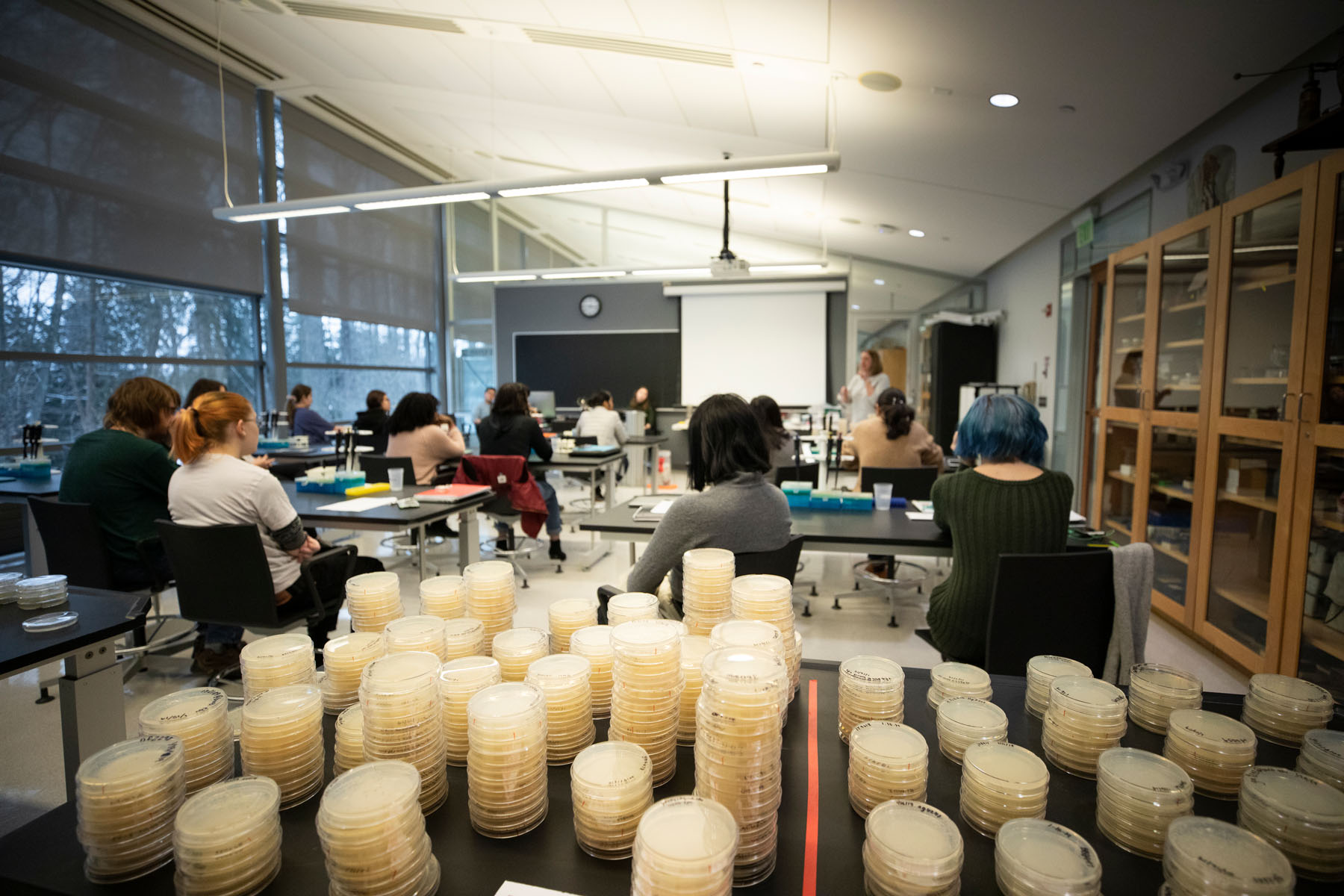 Students Collect, Test, and Map nearly 400 Water Samples from Across the Globe
ANNANDALE-ON-HUDSON, N.Y. –Before leaving for winter break last December, all first-year students at Bard College were given a test tube and asked to take it home and collect a sample from a freshwater pond, lake, or stream; take a photo of its source, and bring it back to campus as part of Bard’s 2019 Citizen Science program. The program, an intensive science immersion required of all Bard first-year students, aims to develop science literacy through hands-on, real-world course work and projects. The students’ water samples— collected from nearly 400 sites across the globe—were a main component of this year’s curriculum, which tackled urgent, present-day questions related to water. Students began an ongoing effort to test, plate, photograph, and map the samples, in part to document a violacein-producing bacterium that is central to the research of Bard biology professor Brooke Jude. Photos of the collection sites, as well as many of the petri dish platings of the water samples, were turned into an interactive map that will be used by both Jude and future Citizen Science students.

Mary Krembs, director of the Citizen Science Program, said the focus on water provided an ideal subject that is both part of students’ daily lives and a pressing issue in many communities. Students were asked not only to examine the properties of water and how those properties influence the contamination (and decontamination) of drinking water but also to consider the extent to which problems of contamination go beyond pure science and are affected by social, historical, and political factors. Krembs said 479 students participated in the program and were divided into 28 sections, taught by 28 faculty, each focusing on a different aspect of the science of water issues, from sampling and lab testing to education and communication.

“We’re challenging students to grapple with what it means to be scientifically literate, the role citizens play in weighing in on important scientific issues, how citizens can find the scientific information they need in order to meet the challenges they face, the skills they need to adequately and thoroughly interpret scientific claims, and the ways in which the conduct, analysis, and interpretation of science can be influenced by political and other potentially distorting factors,” said Krembs. “To be literate, students need to know how science is done, vetted, communicated, and taught.”

In addition to its valuable role in this year’s Citizen Science program, the sampling, plating, and mapping will be essential to Jude’s research, which focuses on cataloging and characterizing violacein-producing bacteria to determine if they can be used to treat invasive species infections, such as those currently decimating amphibian populations. Jude said future Citizen Science students will be gathering new water samples, and students in the research section of the program in 2020 will have an opportunity to characterize isolates from this year's collection.

“Up until now, my study site and focus area has been largely contained to the Hudson Valley waterways, and some surrounding sites in the East Coast,” said Jude. “The research we are conducting during Citizen Science has allowed my research program to expand greatly the sites for water collection, via both the student participation as Citizen Scientists and members of the research team. We have plated water samples from over 19 countries and 30 US states, and currently have 299 violacein-producing strains to add to my data set to be further analyzed.”

Krembs gave credit to Bard Systems Administrator Hayden Sartoris ’18, a computer science graduate, for writing the software that enabled the mapping project to come to life.

Citizen Science is an innovative program for all first-year students at Bard College. Through two weeks of intensive study during January intersession, students develop a core understanding of both the conduct and the content of science. This foundation allows them as citizens to grapple with the ever-increasing number of national and global issues influenced by science. The first-year experience at Bard is designed as an immersive introduction to the liberal arts and critical thinking across disciplines. This experience serves as a foundation for all students as they pursue their particular area of interest and encounter issues driven by science that permeate society and impact their daily lives. The Citizen Science Program is a dynamic and challenging learning experience aimed at elevating the ability of each student to understand and apply scientific thought and tools. The program emphasizes the methodology and critical thinking skills used by scientists, and their application. During Citizen Science, students learn by doing. Students are fully engaged in problem solving and must learn to identify, obtain, and digest the types of scientific evidence needed to make informed decisions. Citizen Science mirrors what it is to be a scientist. For more information, visit citizenscience.bard.edu.