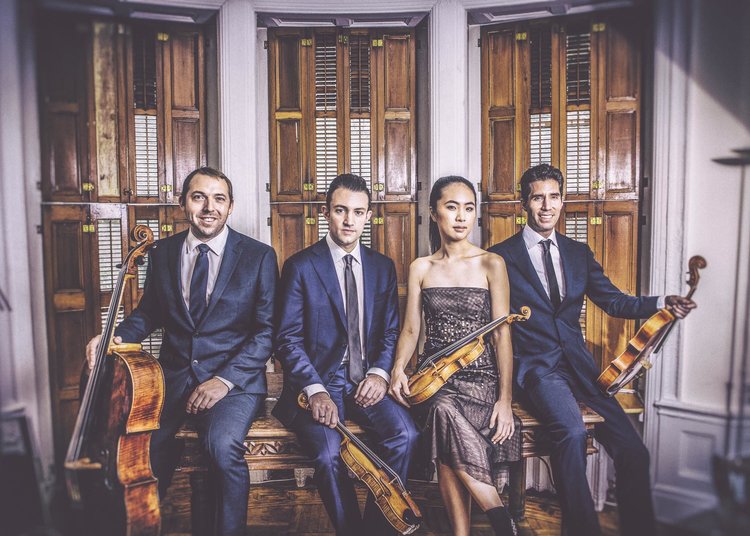 Image Credit: Courtesy of the Artist

The Escher String Quartet has received acclaim for its expressive, nuanced performances that combine unusual textural clarity with a rich, blended sound. Former BBC New Generation Artists, the quartet has performed at the BBC Proms at Cadogan Hall and is a regular guest at Wigmore Hall, both in London. In its hometown of New York, the ensemble serves as Season Artists of The Chamber Music Society of Lincoln Center, where it has presented the complete Zemlinsky Quartet Cycle as well as being one of five quartets chosen to collaborate in a complete presentation of Beethoven’s string quartets.

Praised by The Strad as having “lyricism that stood out . . . a silky tone and beautiful, supple lines,” violist Milena Pajaro-van de Stadt has already established herself as one of the most sought-after violists of her generation.

After four decades of success the world over, the Kalichstein-Laredo-Robinson Trio continues to dazzle audiences and critics alike with its performances. Since making their debut at the White House for President Carter’s inauguration in January 1977, pianist Joseph Kalichstein, violinist Jaime Laredo and cellist Sharon Robinson have set the standard for performance of the piano trio literature, consistently bringing technical mastery, expressive depth, and magnetism to the concert stage.

The Orion Quartet is one of the leading chamber music ensembles on the classical music scene today. Admired for the diverse nature of programming that juxtaposes masterworks of quartet literature with key works of the 20th and 21st centuries, the Orion provides singularly rich dimension to its music making. The Orion String Quartet are artist members of the Chamber Music Society of Lincoln Center and quartet-in-residence at the Mannes School of Music in New York.

In 1950, Helen Huntington Hull joined with her two Staatsburg friends, Mrs. Lydig Hoyt and Mrs. Jonas Borak, as well as Emil Hauser (original first violinist of the Budapest Quartet and member of the Bard College faculty) to bring the best classical musicians of the time to the Hudson Valley to play chamber music for a group of appreciative friends and neighbors. This was the inception of the Hudson Valley Chamber Music Circle (HVCMC). In 1979, the Circle began its formal association with Bard College as an independent program affiliated with the Bard Center. Since then, the audience has expanded to include music lovers from all over the Hudson Valley, as well as neighboring states. In 2000, the distinguished musicians Jaime Laredo and Sharon Robinson became artistic directors for the Circle and have maintained the early reputation for showcasing the finest performances of works from a wide-ranging repertory.