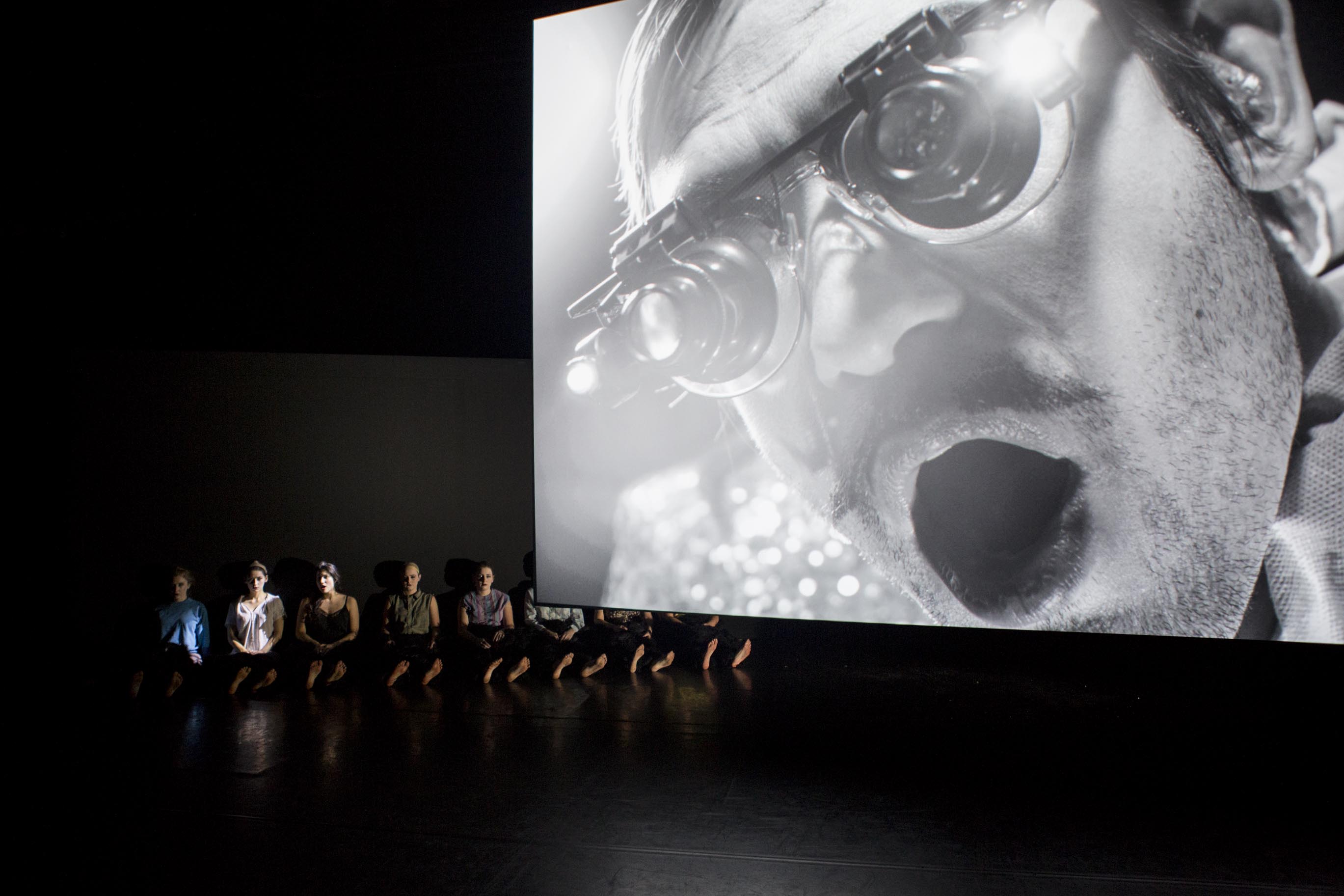 To create their work, Michael Gordon and Deborah Artman drew inspiration from the obituary of Acquanetta (1921–2004), or Mildred Davenport, as she was originally named. Known for her exotic beauty, Acquanetta headlined such 1940s horror films as Captive Wild Woman, Jungle Woman, The Sword of Monte Cristo, and Tarzan and the Leopard Woman. Though thought to be of Arapaho heritage, she was billed as the “Venezuelan Volcano” and gave a different version of her past in every interview.

The catalyst for Acquanetta is a scene from the 1943 cult classic Captive Wild Woman, in which a mad doctor conducts a doomed experiment to create a woman by transplanting a human female’s brain and glands into a gorilla. Artman explains:

“We decided to make the opera based on the laboratory scene and use it as a metaphor for layers of identity. Acquanetta’s story is a quintessential story about how women often have to conceal their truth and hide in plain sight, reinventing themselves to fit an accepted narrative. It has even more resonance now in the current climate when the role of women in power structures is being reevaluated and scrutinized. I’m thrilled that Bard SummerScape is bringing our opera to my home in the Hudson Valley.

In Artman’s libretto, the characters function both as actors playing roles and as the parts they are playing, revealing their inner longings as they wrestle with identity, stereotypes, and typecasting. Gordon says:

“Deborah very cleverly looked into the background and the personal stories of the people in that scene. Every one of the characters in that scene has a story to tell that’s multi-dimensional.”

About her collaborators’ contributions to the project, Artman adds:

“Daniel Fish, our director, has cracked the opera open and elevated it to an electrifying opera-film-theater hybrid never before seen in the opera community. It’s immensely fun with Michael Gordon’s dance-in-your-seat music, eerie sounds, and beautiful, layered voices.”

“Gordon, who has put together one of the greatest bodies of work in contemporary classical music while somehow staying just off the radar, has created something consequential again with Acquanetta. Seeing it is fun in the way of great movies – every moment is vivid and compelling, and the sheer entertainment (which is spectacular) leaves a plangent, lasting aftertaste of emotional mystery and power. … A historic milestone.”

As for Fish’s production, the New York Times observed: “Some of the ways his staging builds and releases tension are too good to spoil.” “The cathartic finale sent me staggering out of the theater,” agreed the New York Observer. As the Theatre Times put it, “Acquanetta, as entertaining and funny as it is, will have you thinking about it for days.”

About Gordon, Artman, Fish, and the cast and creative team
Composer Michael Gordon has produced a strikingly diverse body of work over the past three decades, accruing honors from the Guggenheim Foundation, the National Endowment for the Arts, the Foundation for Contemporary Performance Arts, the American Academy of Arts and Letters, and many more. Merging subtle rhythmic invention with incredible power, his music combines “the fury of punk rock, the nervous brilliance of free jazz and the intransigence of classical modernism” (New York Times).

A longtime creative partner of Gordon and his fellow Bang on a Can composers David Lang and Julia Wolfe, librettist Deborah Artman specializes in exploring new forms and interdisciplinary collaborations. Her work has appeared in national journals, such as American Short Fiction and the New York Times Magazine, and been recognized with fiction fellowships from the New York Foundation for the Arts, the Fine Arts Work Center in Provincetown, and the MacDowell Colony.

To direct Acquanetta, Gordon and Artman turned to Daniel Fish, winner of the 2017 Herb Alpert Award in the Arts for Theatre. Seen at the Royal Shakespeare Company, American Repertory Theater, BAM Next Wave festival, L.A Opera, San Francisco Opera, and other venues and festivals throughout the U.S. and Europe, his work explores the intersection of experimental theater, opera, film, and installation art. Acquanetta marks his first return to Bard since SummerScape 2015, when he debuted his production of Oklahoma!. Now the Tony-nominated toast of Broadway, it recently enjoyed a sold-out run at St. Ann’s Warehouse in Brooklyn, where it was chosen as one of the New York Times’s “Best Theater of 2018” and as No. 1 on Time magazine’s list of “The 10 Best Plays and Musicals of 2018.”

Heading up Bard’s Acquanetta cast is National Young Arts Foundation Award-winner Rebecca L. Hargrove, making her role and festival debuts as the title character. Her past credits include Carnegie Hall, the Kennedy Center, and New York City Opera, as well as Netflix’s House of Cards, HBO’s Random Acts of Flyness, and The Tonight Show Starring Jimmy Fallon. Amelia Watkins, a soprano blessed with a “rich, glowing lyric sound destined for the heights” (Opera News), reprises the role of the Brainy Woman, which she originated at PROTOTYPE, “excel[ling] in bringing across the character’s underlying existential dread” (New York Times). Eliza Bagg, “a sought-after vocalist on the so-called indie classical scene” (WNYC), revisits her portrayal of the Ape, in which she previously “maintain[ed] a commanding vocal presence throughout” (Theatre Times). Christopher Burchett lends his “warm and malleable baritone, … as well as convincing physicality” (Boston Classical Review) to the visionary Director, and Timur – “a wild, riveting performer who wields his powerful voice with heavy metal abandon” (Los Angeles Times) – reprises his depiction of the mad Doctor.

Acquanetta will be conducted by David Bloom ’13 GCP ’15. Bloom serves as co-artistic director and conductor of Contemporaneous, and has conducted more than 200 world premieres for such presenters as Carnegie Hall, Lincoln Center, New York’s Museum of Modern Art, and Bang on a Can. Active as a conductor of new opera, he has led productions for PROTOTYPE Festival, Opera Omaha, Beth Morrison Projects, American Opera Projects, and Experiments in Opera. Together with members of the Grammy-nominated Choir of Trinity Wall Street, he will be joined by musicians from the Bang on a Can Opera ensemble, which has been called “the country’s most important vehicle for contemporary music” (San Francisco Chronicle).

Acquanetta is produced by Beth Morrison Projects, with scenic design by Lucille Lortel Award-nominee Amy Rubin; video design by Joshua Higgason, whose credits include BAM, La Scala, and the Salzburg Festival; costumes by Terese Wadden, who previously collaborated with Fish on Oklahoma!; lighting by Barbara Samuels, a current nominee for this year’s Lucille Lortel and Drama Desk Awards; sound by Garth MacAleavey, who has worked with artists ranging from Steve Reich and the Kronos Quartet to Paul Simon and Erykah Badu; and dramaturgy by Michael R. Jackson, whose honors include a 2017 Lincoln Center Emerging Artist Award.

SummerScape’s theatrical track record is a stellar one. Offering a “stranger, sexier, more melancholic version of Peter Pan” (New York Times), last season’s original production of Leonard Bernstein’s rarely-performed musical theater gem was chosen as one of WQXR’s most memorable concerts of 2018 and a highlight of the Bernstein centennial. As New York Arts declares: “Bard summer drama has been consistently of the highest order.”

Tickets: $25 to $75
LUMA Theater, Richard B. Fisher Center for the Performing Arts
SummerScape 2019: other key performance dates by genre

* The Bard SummerScape coach from Manhattan is available for these performances.

Tickets for all Bard SummerScape events are now on sale. For tickets and further information on all SummerScape events, call the Fisher Center box office at 845-758-7900 or visit fishercenter.bard.edu/summerscape.

Venues:
SummerScape opera, theater, and dance performances and most Bard Music Festival programs are held in the Sosnoff Theater or LUMA Theater in Bard’s Richard B. Fisher Center for the Performing Arts, designed by Frank Gehry and celebrated since its opening as a major architectural landmark in the region. Some chamber programs and other BMF events are in Olin Auditorium, and the Spiegeltent has its own schedule of events, in addition to serving as a restaurant, café, and bar before and after performances. Film Series screenings are at the Jim Ottaway Jr. Film Center in the Milton and Sally Avery Arts Center.

New York City Round-Trip Coach Transportation:
To make a reservation on the round-trip SummerScape coach provided exclusively to ticket holders for specific performances indicated by * in the listings above, call the box office at 845-758-7900 or select this option when purchasing tickets. The round-trip fare is $40 and reservations are required. The coach departs from behind Lincoln Center, on Amsterdam Avenue between 64th and 65th Streets. Find additional details at: fishercenter.bard.edu/visit/transportation.

Full Schedule:
For a complete schedule of SummerScape and Bard Music Festival events (subject to change), follow the links given below. Updates are posted at the festival web site fishercenter.bard.edu/summerscape.
Fisher Center members receive priority access to the best seats in advance, and those who join the Center’s email list receive advance booking opportunities as well as regular news and updates.

Tickets and Subscriptions: fishercenter.bard.edu/boxoffice; or by phone at 845-758-7900. Tickets to all mainstage events start at $25.

Updates: Bard’s “e-subscribers” get all the news in regular updates. Click here to sign up, or send an e-mail to fishercenter@bard.edu.

All programs are subject to change.

The 2019 SummerScape season is made possible in part through the generous support of Jeanne Donovan Fisher, the Martin and Toni Sosnoff Foundation, the Board of The Richard B. Fisher Center for the Performing Arts at Bard College, the Board of the Bard Music Festival, and Fisher Center members, as well as grants from the National Endowment for the Arts and the New York State Council on the Arts with the support of Governor Andrew Cuomo and the New York State Legislature.