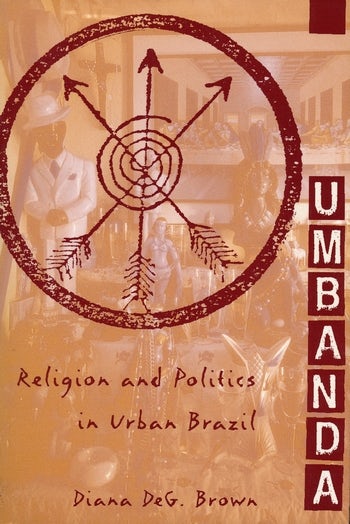 Professor Brown explores the history and development of the syncretistic Brazilian religion of Umbanda, from its beginnings in Rio de Janeiro during the 1920s to the late 1970s, examining its changing spectrum of practices, followers, and beliefs.

“On New Year’s Eve 1993, from the window of a Rio de Janeiro apartment overlooking Copacabana beach, I waited expectantly for the worshippers of Yemanjá to arrive, dressed for her ceremonies, the women resplendent in their long, white lace-trimmed outfits or in brightly colored full satin skirts. I wanted to see them loaded down with flowers, candles, food and drink; to watch them set up these offerings in the sand and begin their ceremonies; to go down and join them. In 1970, the last New Year’s Eve I had spent in Rio doing research for this book, the evening had begun with a religious procession much like those for Catholic saint days except that it was the Afro-Brazilian sea deity Yemanjá whose image was carried aloft to the edge of the beach, accompanied by thousands of Umbanda worshippers carrying lighted candles and singing Umbanda hymns and, at the head of the procession, the Umbandista politicians who were the secular patrons of the public event. Then this famous beach, a long crescent of white sand framed by the lights of the buildings along the shore, had become so densely crowded with Umbanda rituals that I could hardly move among them”