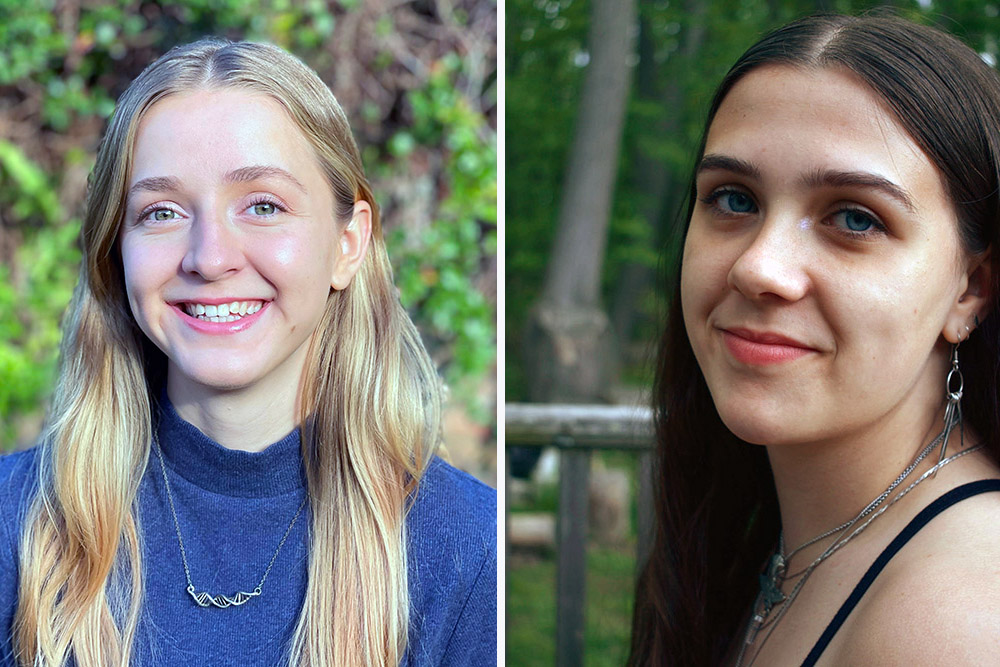 L-R:  Emma Tilley ’23 and Francesca Houran ’23.
Two Bard College students have been awarded highly competitive Benjamin A. Gilman International Scholarships by the U.S. Department of State. Art history and Italian studies major Francesca Houran ’23 has been awarded $5,000 towards her studies at the University of Trento in Italy, where she will be the first to participate in a newly established tuition exchange program with Bard. “Through studying abroad, I hope to further my knowledge of the hermaphrodite within the context of the Italian Renaissance and how it influences the gender binary in contemporary Italy. I am also excited to explore the ascending, vertically-oriented architecture of museums, churches, and monuments that prompts climbing and physical ascension as a symbol of conquest and hierarchy,” says Houran. “My overarching goal is to build a foundation for a career in ethical museum curation and nuanced communication of histories surrounding gender, race, and colonialism—a goal that traveling through the Gilman Scholarship will make possible for me as a low-income college student.”

Biology major and premed student Emma Tilley ’23 has been awarded $4,500 to study via Bard’s tuition exchange at the University College Roosevelt in the Netherlands. “I am grateful for the Gilman scholarship and excited for the opportunity to travel abroad and learn more about international healthcare systems and the ways that Covid has impacted nations differently. My additional focus is to continue working on promoting inclusion in STEM on a global scale,” says Tilley.

Gilman Scholars receive up to $5,000, or up to $8,000 if also a recipient of the Gilman Critical Need Language Award, to apply toward their study abroad or internship program costs. Since the program’s establishment in 2001, over 1,350 U.S. institutions have sent more than 34,000 Gilman Scholars of diverse backgrounds to 155 countries around the globe. The program has successfully broadened U.S. participation in study abroad, while emphasizing countries and regions where fewer Americans traditionally study.

CAPTION INFO: Bard College students Francesca Houran ’23 and Emma Tilley ’23 have won highly competitive Benjamin A. Gilman International Scholarships from the U.S. Department of State.
#
About Bard College
Founded in 1860, Bard College is a four-year, residential college of the liberal arts and sciences located 90 miles north of New York City. With the addition of the Montgomery Place estate, Bard’s campus consists of nearly 1,000 parklike acres in the Hudson River Valley. It offers bachelor of arts, bachelor of science, and bachelor of music degrees, with majors in nearly 40 academic programs; graduate degrees in 13 programs; eight early colleges; and numerous dual-degree programs nationally and internationally. Building on its 161-year history as a competitive and innovative undergraduate institution, Bard College has expanded its mission as a private institution acting in the public interest across the country and around the world to meet broader student needs and increase access to liberal arts education. The undergraduate program at our main campus in upstate New York has a reputation for scholarly excellence, a focus on the arts, and civic engagement. Bard is committed to enriching culture, public life, and democratic discourse by training tomorrow’s thought leaders. For more information about Bard College, visit bard.edu.
###