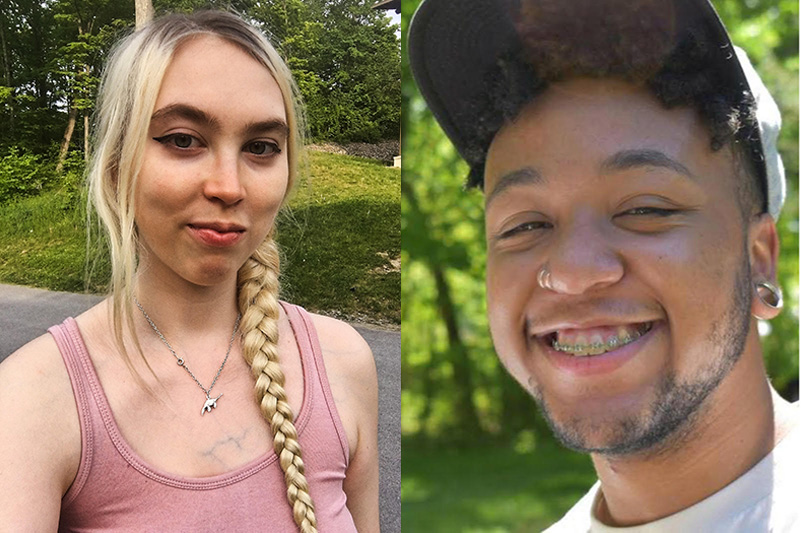 Bard College students Jourdan Perez ’23 and Tallulah Woitach ’23 have been awarded highly competitive Benjamin A. Gilman International Scholarships from the U.S. Department of State to study abroad. Perez was awarded $4,500 toward his studies at Bard College Berlin in fall 2021, and Woitach was awarded $4,000 toward her studies at the University of Sydney in Spring 2022.

“It is an unbelievable honor to be selected for such a prestigious award,” said Woitach, a written arts major. “I am so beyond excited to go to Australia to study indigenous culture, with a focus on oral tradition. All too often in western culture, the written word becomes distanced from the deeper ancient energy language is borne out of. I want to learn from those who know how to make words come alive, by connecting to something much greater than ourselves.”

“I'm very excited to explore Berlin and continue studying German language and culture,” said Perez, a sociology major with a concentration in gender and sexuality studies. “I would like to thank Trish Fleming (Bard’s Study Abroad Adviser) for informing me about the Gilman Scholarship, as well as reviewing my application one last time before I submitted.”

Perez and Woitach were among more than 1,500 U.S. undergraduate students selected to receive Gilman scholarship awards from the March 2021 application deadline. The recipients of this prestigious scholarship are American undergraduate students attending 467 U.S. colleges and represent all 50 U.S. states, the District of Columbia and Puerto Rico. These Gilman Scholars will study or intern in 96 countries through the end of 2022.

The U.S. Department of State’s Benjamin A. Gilman International Scholarship Program enables students of limited financial means to study or intern abroad, providing them with skills critical to our national security and economic prosperity. Gilman Scholars receive up to $5,000, or up to $8,000 if also a recipient of the Gilman Critical Need Language Award, to apply toward their study abroad or internship program costs. Since the program’s establishment in 2001, over 1,300 U.S. institutions have sent over 33,000 Gilman Scholars of diverse backgrounds to 151 countries around the globe. The program has successfully broadened U.S. participation in study abroad, while emphasizing countries and regions where fewer Americans traditionally study. As Secretary of State Anthony Blinken said, “People-to-people exchanges bring our world closer together and convey the best of America to the world, especially to its young people.” The late Congressman Gilman, for whom the scholarship is named, served in the House of Representatives for 30 years and chaired the House Foreign Relations Committee. When honored with the Secretary of State’s Distinguished Service Medal in 2002, he said, “Living and learning in a vastly different environment of another nation not only exposes our students to alternate views but adds an enriching social and cultural experience. It also provides our students with the opportunity to return home with a deeper understanding of their place in the world, encouraging them to be a contributor, rather than a spectator in the international community.”

The Gilman Program is sponsored by the U.S. Department of State’s Bureau of Educational and Cultural Affairs (ECA) and is supported in its implementation by the Institute of International Education (IIE). For more information, visit gilmanscholarship.org.

About Bard College
Founded in 1860, Bard College is a four-year residential college of the liberal arts and sciences located 90 miles north of New York City. With the addition of the Montgomery Place estate, Bard’s campus consists of nearly 1,000 parklike acres in the Hudson River Valley. It offers bachelor of arts, bachelor of science, and bachelor of music degrees, with majors in nearly 40 academic programs; graduate degrees in 11 programs; eight early colleges; and numerous dual-degree programs nationally and internationally. Building on its 161-year history as a competitive and innovative undergraduate institution, Bard College has expanded its mission as a private institution acting in the public interest across the country and around the world to meet broader student needs and increase access to liberal arts education. The undergraduate program at our main campus in upstate New York has a reputation for scholarly excellence, a focus on the arts, and civic engagement. Bard is committed to enriching culture, public life, and democratic discourse by training tomorrow’s thought leaders. For more information about Bard College, visit bard.edu.
# # #
(5/24/21)