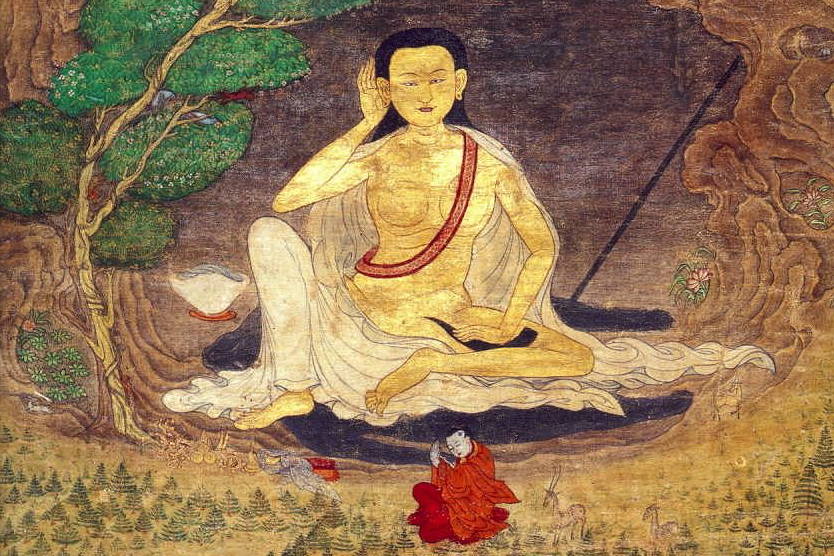 The yogin Milarepa (ca. 1028–1111). Image: public domain
From April 8–April 10, the US-China Music Institute of the Bard College Conservatory of Music presents Harmony and Compassion: Music in Buddhist Ritual, a three-day online conference and performance series exploring forms of Buddhist musical practice through online talks, performances, and demonstrations. Speakers will provide historical, sociological, and musicological context for musical rituals in Buddhist traditions. Performances will draw from different regions and styles of traditional chanting, ceremonial music, and contemporary composition. The conference and performances are free and open to the public. For information and to register, please click here.

Buddhism is a philosophy of life that aims to liberate living beings from suffering. Because of that, compassion is at the core of Buddhist teaching. Music plays an integral role in the practice of Buddhism, and has been said to “adorn the places where the Buddha preaches.”

The Harmony and Compassion conference features discussions by scholars, educators, composers, lamas, monks, and musicians on the origins of Buddhist poetics, song, chant, and other forms, as well as performances of ceremonial music from temples in the regions of Northern China, Southern China, Taiwan, and Tibet, as well as Bhutan, and North America. Attendees will hear chanting in solitude and in small groups, and instrumental music as large as a symphony orchestra in a concert hall, or as intimate as a duet for guqin and bamboo flute. The conference will close with a special music-filled event from the Kingdom of Bhutan, a message of healing from one of the happiest nations on earth.

Harmony and Compassion: Music in Buddhist Ritual
Schedule of Events:

The US-China Music Institute was founded in 2018 by conductor Jindong Cai and Robert Martin, founding director of the Bard College Conservatory of Music, with the mission to promote the study, performance, and appreciation of music from contemporary China and to support musical exchange between the United States and China. In partnership with the prestigious Central Conservatory of Music in Beijing, the Institute has embarked on several groundbreaking projects including the first degree-granting program in Chinese instrument performance in a U.S. conservatory. barduschinamusic.org

Recognized as one of the finest conservatories in the United States, Bard College Conservatory of Music is guided by the principle that young musicians should be broadly educated in the liberal arts and sciences to achieve their greatest potential. The mission of the Conservatory is to provide the best possible preparation for a person dedicated to a life immersed in the creation and performance of music. The five-year, double-degree program combines rigorous conservatory training with a challenging and comprehensive liberal arts program. All Conservatory students pursue a double degree in a thoroughly integrated program and supportive educational community. Graduating students receive a bachelor of music and a bachelor of arts in a field other than music. At the Bard Conservatory the serious study of music goes hand in hand with the education of the whole person. Founded in 2005 by cellist and philosopher Robert Martin, the Conservatory welcomed the composer Tan Dun as its new dean in the summer of 2019. bard.edu/conservatory
# # #
(4.5.21)