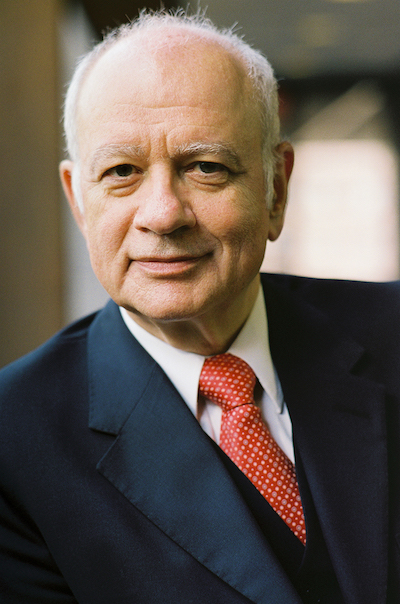 ANNANDALE-ON-HUDSON, N.Y.— Economist Dimitri B. Papadimitriou, president of the Levy Economics Institute of Bard College and executive vice president and Jerome Levy Professor of Economics at Bard College, has been appointed as Greece’s minister of economy and development. As an economist, Papadimitriou has focused on financial structure reform, fiscal and monetary policy, community development banking, employment policy, and the distribution of income, wealth, and well-being. He heads the Levy Institute's macroeconomic modeling team studying and simulating the U.S. and world economies, including extensive research and modeling of the Greek economy. Papadimitriou has been president of the Levy Institute since 1986 and executive vice president, provost, and economics professor at Bard since 1977.


Dimitri B. Papadimitriou has authored or coauthored many articles in academic journals and Levy Institute publications relating to Federal Reserve policy, fiscal policy, financial structure and stability, employment growth, and Social Security reform. In 2008, he was instrumental in the republication, by McGraw-Hill, of Hyman P. Minsky's seminal Stabilizing an Unstable Economy and John Maynard Keynes.

Papadimitriou has testified on a number of occasions at U.S. Senate and House of Representatives committee hearings, was vice-chairman of the Trade Deficit Review Commission of the U.S. Congress from 1999 to 2001, and was a member of the Competitiveness Policy Council's Subcouncil on Capital Allocation from 1993 to 1998. He was a distinguished scholar at the Shanghai Academy of Social Sciences (PRC) in fall 2002. Papadimitriou has edited and contributed to 13 books published by Palgrave Macmillan, Edward Elgar, and McGraw-Hill, and is a member of the editorial boards of the Journal of Economic Analysis, Challenge, and the Bulletin of Political Economy. In addition, he has served as executive vice president of Bard College at Simon’s Rock, Great Barrington, Massachusetts, since 1979; as managing director of Bard College Berlin, Germany (2011–15); and as trustee and treasurer (1992–2013) and chairman (2013– ) of the American Symphony Orchestra. He was a consultant and evaluator of undergraduate and graduate programs in economics for the Greek Ministry of Education from 2002 to 2005 and a member of the graduate faculty of the New School for Social Research from 1975 to 1976. He is a graduate of Columbia University and received a Ph.D. in economics from the New School. He will continue to hold his titles at Bard while on leave.

The Levy Economics Institute of Bard College, founded in 1986 through the generous support of Bard College trustee Leon Levy, is a nonprofit, nonpartisan, public policy research organization. The Levy Institute is independent of any political or other affiliation, and encourages diversity of opinion in the examination of economic policy issues while striving to transform ideological arguments into informed debate.

The ultimate purpose of all of the Levy Institute's research and activities is to serve the wider policymaking community in the United States and the rest of the world by enabling scholars and leaders in business, labor, and government to work together on problems of common interest. To stimulate discussion of economic issues, the Levy Institute disseminates its findings through publications, conferences, workshops, seminars, congressional testimony, and other activities to an international audience of public officials, private sector executives, academics, and the general public. An annual conference on the state of the U.S. and world economies is dedicated to the economic legacy of Hyman P. Minsky, the late financial economist and Levy Institute distinguished scholar. The Levy Institute's programs give Bard College undergraduates the opportunity to meet the prominent figures who give seminars, attend conferences, and serve on the research staff. Through a Levy Institute affiliation with Cambridge University, one or two Bard undergraduates may spend their junior year at Christ's College. Integrated activities of the Levy Institute and Bard College include the annual award of the Levy Economics Institute Prize to a graduating senior with an outstanding academic record in economics, and several annual scholarships for students concentrating in economics.


Founded in 1860, Bard College is a four-year residential college of the liberal arts and sciences located 90 miles north of New York City on the east bank of the Hudson River. It offers bachelor of arts, bachelor of science, and bachelor of music degrees, with concentrations in more than 40 academic programs; graduate degrees in 11 programs; 9 early colleges; and numerous dual-degree programs nationally and internationally. Building on a 150-year history as a competitive and innovative undergraduate institution, Bard College’s mission as a private institution acting in the public interest has expanded across the country and around the world to meet broader student needs and increase access to the liberal arts education The undergraduate program at our main campus in the Hudson River Valley of upstate New York retains a reputation for scholarly excellence, a focus on the arts, and civic engagement. Bard is committed to enriching culture, public life, and democratic discourse by training tomorrow’s thought leaders.
# # #
(11.4.16)