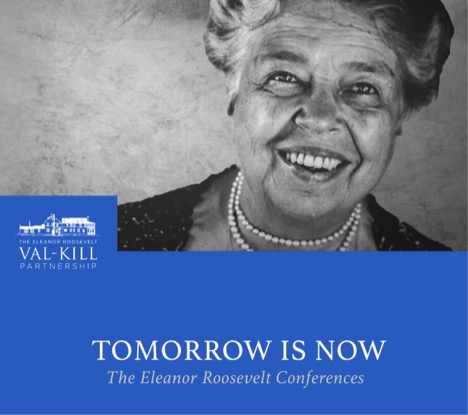 Tuesday, May 5, 2020
2:00 pm – 3:00 pm EDT/GMT-4
The Val-Kill Partnership, in conjunction with the COV-AID Project sponsored by the Open Society University Network and The Talloires Network present:

Join us on Zoom

The Eleanor Roosevelt Val-Kill Partnership is honored to host the Tomorrow Is Now virtual conference series in partnership with the COV-AID project sponsored by the Open Society University Network and The Talloires Network. Members of Eleanor’s Circle, as well as students and faculty across the global networks, are invited to participate in the live Zoom sessions where speakers from around the world will reflect on the relevance of Eleanor’s legacy during the pandemic.

On May 5 the network will host the first Tomorrow Is Now conference with guest speakers Peter Baker, Chief White House Correspondent of The New York Times, and Susan Glasser, staff writer at The New Yorker and founding editor of Politico Magazine, as they explore Eleanor Roosevelt’s legacy in today’s global challenges.

Manuela Roosevelt is the Chair of the Eleanor Roosevelt Val-Kill Partnership, a private nonprofit that works in tandem with the National Park Service for the enhancement of visitors' experience at the home of Eleanor Roosevelt, Val-Kill, in Hyde Park, in upstate New York. The organization funds educational programs, lectures, and has raised more than $2.5 million for NPS to assist in restoration projects at the site. She is the Editorial Director at Callaway Arts and Entertainment, a publisher and cross-platform media company in New York City. She lives with her family at Springwood, the estate where Franklin D Roosevelt was born that now belongs to the National Park Service.

Peter Baker is the Chief White House Correspondent for The New York Times and a political analyst for MSNBC who covered President Obama, three previous presidents, and now President Trump. He previously worked for The Washington Post and is the author of five books, including days of Fire: Bush and Cheney in the White House. He lives in Washington with his wife, Susan Glasser, and their son, Theo Baker.

Susan Glasser writes the column "Letter from Trump’s Washington" in The New Yorker, where she is a staff writer. She has previously served as editor of Politico during the 2016 election cycle, founding editor of Politico Magazine, and editor-in-chief of Foreign Policy magazine, which won three National Magazine Awards during her tenure. Before joining Foreign Policy, Glasser spent a decade at the Washington Post, where she edited the Post's Sunday Outlook and national news sections, helped oversee coverage of Bill Clinton's impeachment, covered the wars in Iraq and Afghanistan, and served as Moscow co-bureau chief. She is the author, with her husband Peter Baker, of Kremlin Rising: Vladimir Putin's Russia and the End of Revolution (2005) and The Man Who Ran Washington: The Life and Times of James A. Baker III (May 2020). They are also writing a book on the Trump presidency and impeachment.