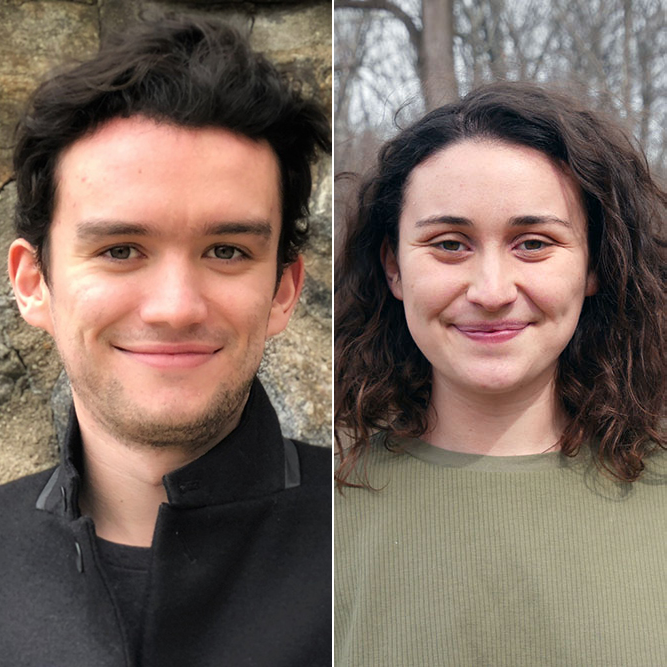 Ben and Catherine Baum. Photos by Suzi Banks Baum (L) and Erika Nelson (R)
When Catherine Baum started looking at colleges, Bard was on her radar: her older brother, Ben, was already a Bard student. The two siblings grew up in Great Barrington, Massachusetts, home of Bard College at Simon’s Rock, about an hour’s drive from Annandale. Their father is a lawyer and their mother is a writer, artist, and teacher; politics and education were frequent topics of discussion as the siblings grew up. When Catherine was still in high school, Ben was telling her about Bard, how he was studying economics and getting involved in political campaigns. She was impressed with what she heard on the news about the Bard Prison Initiative and she loved visiting the campus. She knew she would apply.

Catherine is now a sophomore at Bard studying Human Rights, and plans to become a teacher. She intends to pursue the College’s 4+1 graduate teaching degree through the Bard Master of Arts in Teaching program.

“I wanted human rights to be the lens through which I thought about teaching,” Catherine explains. She sees education as a human right, and an essential component to an educated citizenry and a functional society. Studying human rights gives her new perspective on the classroom, in which she is more aware of the varied backgrounds and struggles of her students, and on her own role as a teacher.

Catherine is a tutor for a long-running Bard TLS project at the Red Hook Residential Center, a low-security juvenile detention center in Red Hook. She visits the location once a week to give students personalized academic attention. “It’s the hardest teaching environment that I’ve been in so far,” she admits. “We read a book with the students and help them with their homework, and also just talk to them and give them some one-on-one time.”

Catherine believes that approaching young students seriously is critical to their sense of worth and their engagement with the learning process. This became apparent to her during her first year at Bard, in a philosophy course taught by Kritika Yegnashankaran. “She was able to make complicated things simple,” Catherine says. “She had high expectations and created an environment where everyone’s contribution was valuable.” Helping her students feel confident and able to access difficult material has become a cornerstone of her approach to teaching.

Catherine has taken advantage of Bard's location to do outdoor environmental education as well. Through a volunteer project during Bard's MLK Day of Engagement last year, she was introduced to the Clearwater. The Clearwater is a replica of a historic Hudson River sloop, an educational vessel that engages people with the life of the river. "Our main thing is bringing school groups on and teaching them. We teach them about the fish, we teach them about the water quality, and we teach them about history." After volunteering on MLK Day, Catherine applied and was accepted as a member of the crew last summer—she lived on the ship for two months.

“She's amazing," Ben Baum says of his sister. "She’s incredible. She’s so much cooler than I am, it’s a problem.”

When Ben was applying to colleges, he hoped to combine a small classroom environment with the opportunity to compete in college athletics. He visited Bard’s campus and learned about the lacrosse team, and he knew it was “the obvious choice.… I applied to a good number of schools. I realized that Bard offered more of the things that I wanted than any other place.”

Ben, now a senior majoring in economics, attended the Bard Globalization and International Affairs (BGIA) Program in New York City the summer after his sophomore year. BGIA students participate in competitive internships while taking Bard courses. While attending BGIA, Ben received an email about an internship opportunity on Zephyr Teachout's congressional campaign. “BGIA was almost over. I had just started as an intern on Zephyr’s campaign in August and then I actually got hired a couple of weeks after that.”

Ben started out at Bard studying politics and economics without a clear idea of where it would lead him. Working on the campaign brought his academic work into the real world, and he loved it. “I can’t really describe how valuable it was,” he observes. “After I started working on the campaign my life took on meaning and intention that I could never have imagined.... I had always wanted to work in politics, but it was being in that world that made it very clear that this was what I wanted to do.”

While working for Teachout, Ben took an academic leave of absence from Bard to commit to the campaign in Washington, D.C. It was through his work on the Teachout Campaign that Ben met his current employer, a New York State congressman.

To keep up with this college credits, Ben has been taking courses at Georgetown University. He will return to Annandale this fall to complete his Senior Project in the Economics Program, which will examine the role of money in politics. The inspiration for his project, Ben says, comes from a Supreme Court case where Justice Louis Brandeis discusses the “curse of bigness.”

“He talks about how the government shouldn’t be larger than corporations and vice versa—that everything has to be proportional in a sense,” says Ben. “That is the inspiration behind this, looking at that proportion, because I think it’s very much out of proportion.”

The flexibility and support system at Bard encouraged Ben to take risks. “Bard requires self-confidence,” he observes. “There isn’t a rigid structure. They’re teaching you, but you have to take initiative to make it your own—Bard is what you make it. I was given an agency that I wouldn’t have otherwise, and that’s allowed me to make some unorthodox decisions, like taking a leave of absence to go work in D.C.”

“It doesn’t really matter what you do as long as it’s something that’s important and meaningful and fulfilling," he adds. "The desire to feel fulfilled in life, in a really deep way, is what the school teaches. And I think that’s what my future holds.”