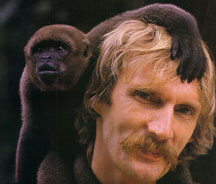 Dr. van Roosmalen Will Give a Public Talk on October 26
ANNANDALE-ON-HUDSON, N.Y.—Bard College announces the appointment of world-renowned field biologist and Amazon researcher Marc van Roosmalen for the academic year 2010–11. Dr. van Roosmalen’s appointment was arranged in partnership with the Institute of International Education’s (IIE) Scholar Rescue Fund. He will reside on campus during his appointment as Distinguished Scholar in Residence and teach courses in biology and in Bard’s Human Right Program. Dr. van Roosmalen will give a public talk about his work in the Amazon rainforests on Tuesday, October 26 at 6:00 p.m. in the Lásló Z. Bitó ’60 Auditorium (Room 103) of the Gabrielle H. Reem and Herbert J. Kayden Center for Science and Computation at Bard College.

Marc van Roosmalen is a prominent botanist and primatologist whose research in the Amazon rainforest has led to the discovery of five species of monkeys and a new primate genus. Moreover, he is on the track of 20 more not-yet-identified primate species and another 20 mammalian megaspecies, terrestrial, arboreal, as well as aquatic (i.e., the dwarf manatee and the “boto roxo” – a new dolphin of the genus Pontaporia or Inia). Dr. van Roosmalen has lived and worked in South American rainforests since 1976 and is one of the most accomplished field biologists and prolific ecologists of our time. He is also naturalist-activist who has worked tirelessly to advance the conservation of Brazilian rainforest habitat. In 2007, Dr. van Roosmalen, who is an outspoken critic of illegal logging and the political corruption leading to deforestation, was arrested in Brazil for biopiracy based on controversial charges. He was sentenced to more than 14 years in prison, the maximum penalty for such charges. Supporters, including a prominent group of international scientists, argue that his sentence amounts to criminalizing science in Brazil. After a long legal battle, a Brazilian supreme court acquitted Dr. van Roosmalen of all charges in November 2008.

“We’re grateful to the IIE Scholar Rescue Fund for their support of Marc van Roosmalen’s year with us at Bard. The IIE Scholar Rescue Fund makes the abstract commitment many of us have to the idea of academic freedom a daily reality for threatened researchers around the world,” said professor Thomas Keenan, director of the Human Rights Project at Bard. “We’re also indebted to our colleagues at SUNY Ulster, who first brought his case to our attention. It’s exciting to be able to provide a safe environment in which Dr. van Roosmalen can continue his research on one of the most endangered environments on the planet.”

“The ethics and principles that guide me through life are strongly rooted in profound and intimate contact with a pristine, ancient, millions-of-years-of-evolution, breathing natural environment,” says Dr. van Roosmalen of his work in the Amazon. “It would be a perfect therapy for people all over the world—in particular those living in crowded concrete mega-cities totally out of touch with nature—to come to this place and experience the work of nature or God without any hint to or a ‘helping hand’ from our own species, Homo sapiens.”

About Marc van Roosmalen
Marc van Roosmalen was born in the Netherlands and became a naturalized Brazilian citizen in 1997. He received a masters in biology (primatology, tropical ecology, plant taxonomy) from the University of Amsterdam in 1974, and a Ph.D. in ecology and nature conservation from the Universities of Wageningen and Amsterdam in 1980. His doctoral dissertation was based on extensive field research of the black spider monkey in its natural habitat in Suriname. From 1973 to 1975, Dr. van Roosmalen conducted research on fruits and seeds and published the two-volume book Surinaams Vruchtenboek, with illustrations and descriptions of 1,400 species of wild fruits from the rain forests of Suriname. From 1981 to 1985, he compiled and published the well-known book, A Field Guide to the Fruits of the Guianan Flora, including illustrations and descriptions of about 2,000 species of wild fruits of the rain forests of the Guayanan Shield. In 1986, he was contracted by the Brazilian Ministry of Science and Technology as senior scientist at the National Institute for Amazonian Research (INPA), Manaus-Amazonas, Brazil, and worked there until 2003. Between 1989 and 2002, he founded several rehabilitation and breeding centers for orphaned monkeys including the Center for the Rehabilitation and Re-introduction of Endangered Wildlife in the federal Rio Cuieiras Nature Reserve; produced four wildlife documentaries for Survival Anglia Ltd, U.K.; and founded the Amazon Association for the Preservation of High Biodiversity Areas (AAPA), which enabled the purchase of legal land titles of pristine rain forest in areas harboring extremely high biodiversity and/or animals and plants new to science. His publications include several scientific papers in peer-reviewed journals, A Guide to the Fruits of the Amazonian Rain Forest (1996–2002), Lianas, Scandent Shrubs and Hemi-Epiphytes of Suriname, and their Use in Traditional Healing (1998–2001), and Barefoot through the Amazon: On the Path of Evolution (2008). In November 1997, he was knighted as Officer in the Order of the Golden Ark, a prestigious environmental award created and bestowed upon by His Royal Highness Prince Bernhard of the Netherlands at the Royal Palace at Soestdijk. Time magazine named him one of the “Heroes for the Planet” in 2000. He has been the subject of many articles published in the New York Times, Smithsonian Magazine, Wired, Time, and others. He is the subject of the documentary film Species Hunter released by National Geographic.

About the Institute of International Education Scholar Rescue Fund
The Institute of International Education (IIE) is a world leader in the international exchange of people and ideas. An independent, nonprofit organization founded in 1919, IIE has 19 offices worldwide, over 800 college and university IIENetwork members, and more than 5,000 volunteers. IIE designs and implements programs of study and training for students, educators, young professionals and trainees from all sectors with funding from government agencies, foundations, corporations, and private individuals. IIE also conducts policy research, and provides advising and counseling on international education and opportunities abroad. The idea of rescuing threatened scholars has long been a part of IIE’s vision since its founding. From the Bolshevik Revolution to the Hungarian Uprising, IIE has demonstrated a commitment to protecting academic freedom. In 2002, IIE’s trustees committed to making scholar rescue a permanent part of its work. Dr. Henry Jarecki (recipient of an honorary degree from Bard College), Dr. Henry Kaufman, Thomas Russo, and George Soros founded the IIE Scholar Rescue Fund. By assuring that threatened scholars find safe haven and continue productive academic work, IIE Scholar Rescue Fund shines light on those who obstruct the pursuit of knowledge and preserves the intellectual capital of humanity, vital for societal progress. Based on the belief that freedom of scholarship is a fundamental right and is essential to fostering knowledge and progress towards peace and prosperity in the world, IIE Scholar Rescue Fund’s mission is to rescue scholars and, by protecting their lives and work, increase their country’s and the world’s level of knowledge. Today, IIE Scholar Rescue Fund formalizes and seeks to endow the activity that the Institute has undertaken throughout its history on behalf of scholars under threat. It has enabled the Institute thus far to issue fellowships to 359 scholars from 43 countries, and to place the scholar-grantees at host institutions in 39 different countries.