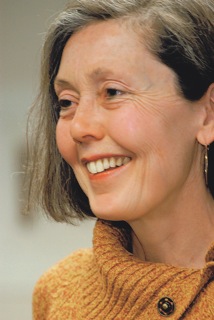 ANNANDALE-ON-HUDSON, N.Y.—Bard College announces the appointment of esteemed writer Anne Carson as Visiting Distinguished Writer in Residence. Carson, who joins the faculty in fall 2014, will teach courses in classical studies and in written arts through the Division of Languages and Literature.

Anne Carson, a classics scholar, poet, essayist, critic, and translator, has won international acclaim across genres. She was twice a finalist for the National Book Critics Circle Award; was honored with the 1996 Lannan Award and the 1997 Pushcart Prize, both for poetry; and was named a MacArthur “Genius” Fellow in 2000. In 2001 she received the T. S. Eliot Prize for Poetry–the first woman to do so—along with the Griffin Poetry Prize and the Los Angeles Times Book Prize. She has also received a Guggenheim fellowship and Rockefeller Foundation Fellowship, and was the Anna-Maria Kellen Fellow at the American Academy in Berlin, Germany. Carson has published 18 books that defy traditional literary genres—merging poetry, prose, fiction, nonfiction, and translation. She is also renowned for her artistic collaborations on performance pieces with the Merce Cunningham Dance Company, Laurie Anderson, Lou Reed, and Kim Anno, among others. Recent publications include Red Doc>; Antigonick; NOX; An Oresteia: Agamemnon by Aiskhylos, Elektra by Sophokles, Orestes by Euripides; Grief Lessons: Four Plays by Euripides; If Not, Winter: Fragments of Sappho; The Beauty of the Husband: A Fictional Essay in 29 Tangos; Men in the Off Hours; and Autobiography of Red. She received her B.A., M.A., and Ph.D. degrees from the University of Toronto. She has taught previously at New York University; University of Michigan; University of California, Berkeley; McGill University; Emory University; Princeton University; and University of Calgary.