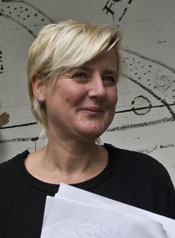 The Keith Haring Fellowship in Art and Activism was established to allow a distinguished leader in the field to investigate the role of art as a catalyst for social change, linking the two programs and presenting original research in an annual lecture. The Keith Haring Lecture in Art and Activism will be delivered in Spring 2015 at Bard College and will be published and widely distributed among universities and colleges internationally.

Jeanne van Heeswijk is a visual artist who facilitates the creation of dynamic and diversified public spaces in order to “radicalize the local”. Van Heeswijk embeds herself as an active citizen in communities, often working for years at a time. These long-scale projects, which have occurred in many different countries, transcend the traditional boundaries of art in duration, space and media and questions art’s autonomy by combining performative actions, meetings, discussions, seminars and other forms of organizing and pedagogy. Inspired by a particular current event, cultural context or intractable social problem, she dynamically involves neighbors and community members in the planning and realization of a given project. As an “urban curator”, van Heeswijk’s work often unravels invisible legislation, governmental codes and social institutions, in order to enable communities to take control over their own futures. Noted projects include Hotel New York P.S. 1 in New York (September 1998 to August 1999); De Strip (The Strip) in Westwijk, Vlaardingen (May 2002 - May 2004); Het Blauwe Huis (The Blue House) in Amsterdam (May 2005 - December 2009); and 2Up 2Down/Homebaked in Liverpool (November 2011 - present); Freehouse, Radicalizing the Local in Rotterdam (September 2008- present).

Her work has also been featured in numerous books and publications worldwide, as well as internationally renowned biennials such as those of Liverpool, Busan, Taipei, Shanghai, and Venice. She has received a host of accolades and awards for her work including most recently the 2012 Curry Stone Prize for Social Design Pioneers, and in 2011, the Leonore Annenberg Prize for Art and Social Change.

“The Keith Haring Fellowship in Art and Activism is an appropriate tribute to the life and work of Keith Haring, whose contributions to the visual arts and to human rights activism cannot be separated. Just as his playful and polemical work injected political questions about HIV/AIDS and gay identity into a sometimes-complacent art world, so his activism helped force mainstream advocacy organizations to take the AIDS crisis seriously as a broad human rights issue rather than a narrow special interest. It is this complicated engagement between human rights and the arts that the two Bard programs seek to honor—and to emulate—in the Keith Haring Fellowship in Art and Activism. We are delighted that Jeanne van Heeswijk is the inaugural Keith Haring Fellow.”

“In underwriting the Keith Haring Fellowship in Art and Activism at Bard College, the Keith Haring Foundation is delighted to facilitate a program that so perfectly addresses Haring’s legacy of employing visual art to stimulate discourse about the many human rights challenges that are as pervasive today as they were during his own lifetime,” said Julia Gruen, the Foundation’s executive director. “Bard’s history of attracting and recruiting the best and the brightest among teachers, curators, artists, activists and scholars is well-established. For the Keith Haring Foundation, now celebrating its 25th year, this fellowship perfectly embodies our mission to honor Keith’s indomitable spirit and lifelong commitment to challenging the status quo and igniting activism and creativity among and on behalf of all individuals.”

About the Center for Curatorial Studies and the Human Rights Project, Bard College

Bard College seeks to realize the best features of American liberal arts education, enabling individuals to think critically and act creatively based on a knowledge and understanding of human history, society, and the arts. Two pioneering programs developed under this mission are the Center for Curatorial Studies and the Human Rights Project. The Human Rights Project, founded in 1999, developed the first interdisciplinary undergraduate degree program in Human Rights in the United States. HRP maintains a special interest in freedom of expression and the public sphere, and explores the too-often neglected cultural, aesthetic, and representational dimensions of human rights discourse.

CCS Bard was founded in 1990 as an exhibition and research center for the study of late twentieth-century and contemporary art and culture and to explore experimental approaches to the presentation of these topics and their impact on our world. Since 1994, the Center for Curatorial Studies and its graduate program have provided one of the world’s most forward thinking teaching and learning environments for the research and practice of contemporary art and curatorship. Broadly interdisciplinary, CCS Bard encourages students, faculty and researchers to question the critical and political dimension of art, its mediation and its social significance. CCS Bard cultivates innovative thinking, radical research and new ways to challenge our understanding of the social and civic values of the visual arts. CCS Bard provides an intensive educational program alongside its public events, exhibitions, and publications, which collectively explore the critical potential of the institutions and practices of exhibition-making. It is uniquely positioned within the larger Center's tripartite resources, which include the internationally renowned CCS Bard Library and Archives and the Hessel Museum of Art, with its rich permanent collection.

About the Keith Haring Foundation

For further information, images or to arrange interviews, please contact: