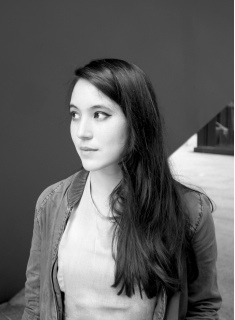 Alexandra Kleeman, Bard Fiction Prize winner and writer in residence at Bard College, will read from her work on Monday, February 15. Free and open to the public, the reading begins at 7 p.m. in the László Z. Bitó ’60 Auditorium in Bard’s Reem-Kayden Center. For more information call 845-758-7087.

Kleeman received the 2016 Bard Fiction Prize for her debut novel You Too Can Have a Body Like Mine (Harper 2015). Called “brilliant and disturbing” by the New York Times, Kleeman’s darkly allegorical satire follows a woman known only as A, who lives in an unnamed American city with her roommate, B, and boyfriend, C, who wants her to join him on a reality dating show called That’s My Partner! A eats mostly popsicles and oranges and watches endless amounts of television, often just for the commercials. B is attempting to make herself a twin of A, who in turn hungers for something to give meaning to her life, something aside from C’s pornography addiction. Meanwhile, her neighbors across the street are a family who have begun “ghosting” themselves beneath white sheets, and whose garage door features a strange scrawl of graffiti: he who sits next to me, may we eat as one.

The Bard Fiction Prize committee writes: “Alexandra Kleeman’s You Too Can Have a Body Like Mine wraps a nightmare inside absurdity. It is a novel of alienation, paranoia, anxiety, and dread that puts a smile on your face. We live in a reality so sick and absurd already that satire has a hard time one-upping it these days, but Kleeman has done so in a way that is at once moving, haunting, hilarious, and surpassingly strange. It’s a novel about starvation that one reads with voracious hunger. It makes you laugh and creeps you out, it disturbs and delights and keeps you rooted in your chair, flipping the pages, submerged, sunk, lost, enchanted. Alexandra Kleeman’s fiction is so dark and sad precisely because it is so uproariously funny. It’s the laughter of the doomed.”

Alexandra Kleeman has written for publications including the Paris Review, Zoetrope, Harper’s, Guernica, Tin House, Conjunctions, and n+1. She earned her MFA in fiction from Columbia University and has received grants and scholarships from the Bread Loaf Writers’ Conference, the Virginia Center for the Creative Arts, and the Santa Fe Art Institute. She is currently completing a Ph.D. in rhetoric at UC Berkeley. She lives in New York City.