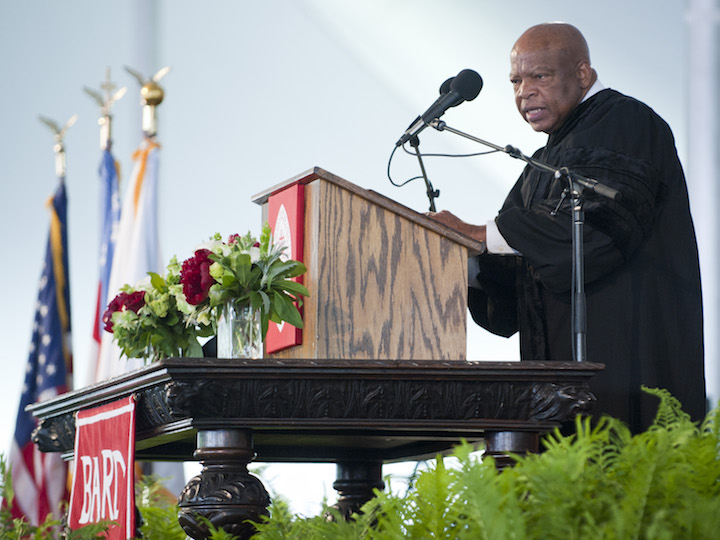 Bard College Holds One Hundred Fifty-Seventh Commencement on Saturday, May 27, 2017

Thank you, Mr. President; members of the board of trustees; Mr. Chairman; deans; inspired faculty; proud parents, family and friends; and to you, the class of 2017. I’m honored to be here, to see each and every one of you. You look good. You look beautiful, handsome, smart and ready to take on the world. Mr. president, thank you for those kind words, thank you. To each and every one of you receiving a diploma today, I say a congratulations. This is your day. Enjoy it. Take a long deep breath, and take it all in. But tomorrow you must be prepared to roll up your sleeves because the world is waiting for talented men and women to lead it to a better place.

You heard it said that I grew up in rural Alabama. That is true. I grew up 50 miles from Montgomery, outside of a little place called Troy. My father was a sharecropper, a tenant farmer. But back in 1944 when I was four years old, and I do remember when I was four, my father had saved $300 dollars, and a man sold him 110 acres of land. My family still owns that land today. On that farm, we raised cotton, corn, peanuts, hogs, cows, and chickens. On the farm, it was my responsibility to care for the chickens. I fell in love raising chickens. Now I know as graduates, as smart, gifted students, you don’t know anything about raising chickens. Do we have anyone here that knows anything about raising chickens? Well, why don’t we compare notes? When a setting hen was set, we had to take the fresh eggs, mark ‘em with a pencil, place them under the setting hen and wait for three long weeks for the little chicks to hatch. Some of you may be saying, “Now, John Lewis, why do you mark those fresh eggs with a pencil before you place them under the setting hen?” Well, from time to time, another hen would get on that same nest, and there would be some more fresh eggs, and (we had to tear) the fresh eggs from the eggs already under the setting hen. Do you follow me? No, you don’t follow me. That’s okay. So when these little chicks were hatched, I would fool these setting hens, I would cheat on these setting hens, I would take these little chicks and give them to another hen and put them in a box with a lantern and raise them on their own, get some more fresh eggs, mark ‘em with a pencil, place them under the setting hen, and encourage the setting hen to stay on the next for another three weeks. When I look back on it, I kept on fooling these setting hens and cheating on these setting hens. It was not the right thing to do. It was not the moral thing to do, not the most loving thing to do, not the most non-violent thing to do. It was not the most democratic thing to do, but I was never quite able to save $18.98 to order the most inexpensive incubator… from the Sears Roebuck store. We used to get the Sears Roebuck catalog. As graduates, as young people, you’ve never seen one of these catalogs. It’s a big book, it’s a heavy book, it’s a thick book. We call it a wish book: “I wish I had this; I wish I had that.”

As a little boy about eight or nine years old, I wanted to be a minister. I wanted to preach the gospel. So, with help of my brothers and sisters and cousins, we would gather all of our chickens together in the chicken yard, like you are gathered here today, and we would have church. And I would start speaking or preaching, when I look back on it, some of these chickens would bow their heads. Some of these chickens would shake their heads. They never quite said amen, but I’m convinced that some of those chickens that I preached to during the forties and the fifties, tended to listen to me much better than some of my colleagues listen to me today in Congress. And some of those chickens were just a little more productive. At least they produced eggs. But that’s enough of that.

When we would visit the little town of Troy, visit Montgomery, visit Tuskegee, visit Birmingham, I saw these signs that said “white men,” “colored men,” “white women,” “colored women,” “white waiting,” “colored waiting.” To go down town on a Saturday afternoon to the theater, to see a movie, all of us little black children had to go upstairs to the balcony. All the little white children when downstairs to the first floor. I kept asking my mother, my father, my grandparents, my great-grandparents: Why? They would say “that’s the way it is. That’s the way it is. Don’t get in the way. Don’t get in trouble.” But one day, in 1955, 15 years old, in the tenth grade, I heard about Rosa Parks, I heard the words of Martin Luther King Jr. on an old radio during the Montgomery bus boycott. And the words of Martin Luther King Jr. and the actions of Rosa Park inspired me to find a way to get in the way. I got in the way, I got in trouble, but I call it good trouble, necessary trouble. I say to you, the graduates of the class of 2017, you must go out and get in trouble, necessary trouble that helps make our country and our world a better place. You must do it.

So I say to you, my young friends, it is left up to you. You must do your part, and when you leave this great college, go out there, get in the way, make a little noise, be bold, be brave, be courageous. Use your education and your training to redeem the soul of our nation and maybe help make our world a better place for all human beings. Our world, our little world, our little planet is dependent on you, so, please, don’t let us down.

You know during the sixties, as (President Botstein) told you, I was arrested a few times, 40 times, beaten, left bloody, unconscious. I thought I was going to die on that bridge in Selma. Since I’ve been in Congress five more times (arrested), and I’ll probably get arrested again for something. But on that bridge, I thought I saw death, but I lived. You will live to tell the story. You can do it. As you go out there, do your work. Never become bitter or hostile. Never get lost in a sea of despair. Keep the faith, keep your eyes on the prize, and never hate. As Dr. Martin Luther King Jr. said, “hate is too heavy a burden to bear.”

During the sixties, I met a man by the name A. Philip Randolph. He was the dean of black leadership who helped plan the March on Washington on August 28, 1963. This man was born in Jacksonville, Florida. He moved to New York City. He became a champion of civil rights, human rights, and labor rights. From time to time, as we were planning to march on Washington, he would say, “maybe our foremothers and our forefathers all came to this great land in different ships, but we all in the same boat now, and we must look out for each other.” So it doesn’t matter whether you black or white, Latino, Asian-American, or Native-American. We’re one people. We’re one family. We all live in the same house. Not just the American house, but the world’s house. So, we must learn to live together. And never give up, never give in, dream dreams, and make those dreams real. I wish you well. So, with faith, hope, peace, and with love, thank you very much.


ABOUT THE COMMENCEMENT SPEAKER


U.S. Representative John Lewis was elected to Congress in November 1986 and has served as U.S. Representative of Georgia’s Fifth Congressional District since then. He is senior chief deputy whip for the Democratic Party in the House, a member of the House Ways and Means Committee and its Subcommittee on Income Security and Family Support, and ranking member of its Subcommittee on Oversight.

As a student at Fisk University, Lewis organized sit-in demonstrations at segregated lunch counters in Nashville, Tennessee. In 1961, he volunteered to participate in the Freedom Rides, which challenged segregation at interstate bus terminals across the South. Lewis risked his life on those rides many times by simply sitting in seats reserved for white patrons. He was beaten severely by angry mobs and arrested for challenging the injustice of Jim Crow segregation in the South.

During the height of the movement, from 1963 to 1966, Lewis was named chairman of the Student Nonviolent Coordinating Committee (SNCC), which he helped form. SNCC was largely responsible for organizing student activism in the movement, including sit-ins and other activities. By 1963, at the age of 23, Lewis had become a nationally recognized leader and was dubbed one of the “Big Six” leaders of the civil rights movement. He was an architect of and a keynote speaker at the historic March on Washington in August 1963. The following year, Lewis coordinated SNCC efforts to organize voter registration drives and community actions during the Mississippi Freedom Summer.

On March 7, 1965, Hosea Williams, another notable civil rights leader, and Lewis led more than 600 peaceful protesters across the Edmund Pettus Bridge in Selma, Alabama. They intended to march from Selma to Montgomery to demonstrate the need for voting rights in the state. The marchers were attacked by Alabama state troopers in a brutal confrontation that became known as “Bloody Sunday.” News broadcasts and photographs of the event helped hasten passage of the Voting Rights Act of 1965.

He is the recipient of numerous awards, including the Medal of Freedom, Lincoln Medal from the historic Ford’s Theatre, and National Education Association Martin Luther King Jr. Memorial Award. In 2001, Lewis was awarded the only John F. Kennedy “Profile in Courage” Award for Lifetime Achievement ever granted by the John F. Kennedy Library Foundation.

Lewis holds a B.A. in religion and philosophy from Fisk University and is a graduate of the American Baptist Theological Seminary in Nashville. He lives in Atlanta, Georgia. He has one son, John Miles.
# # #
(5/27/17)