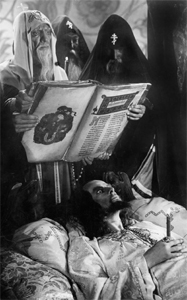 Summerscape and Bard Music Festival 2008 tickets are on sale now!


“The most perfectly realized unfinished film in the history of motion pictures.”
—Stan Brakhage, on Ivan the Terrible

Our 2008 film series takes a varied look at the first, formative decade of the “talkies” through a select mix of classics and lesser-known masterpieces. As it turns out, Sergey Prokofiev (an avid moviegoer) had an affinity for two of the American genres most associated with the period’s innovations: the musical and the screwball comedy.

During the Depression, the avant-garde experiments of the 1920s were largely put on hold. The American movie studio that best represented this shift to a new social awareness was Warner Brothers. As optimistic responses to desperate times, Gold Diggers of 1933 and 42nd Street both possess a vigor and conviction that is seriously lacking in more recent musical imitations. Also at Warner Brothers, director Mervyn LeRoy teamed up with Robert Rossen to make what many consider to be the most nakedly honest social tragedy of the period, They Won’t Forget.

Theodora Goes Wild has been credited with introducing the screwball comedy—that singular mix of witty, heightened banter and antic physicality. One of the genre’s unsung masters, Mitchell Leisen, directed two gems at the end of the decade, Midnight and Remember the Night.

Our series is framed by three films of Jean Renoir, arguably the most important director of the period, whose innovative poetic realism was wedded to a penetrating social vision. La Regle du jeu (Rules of the Game) may be the closest that film has ever come to Shakespearean intricacy. By pairing one of Renoir’s minor masterpieces, Partie de Campagne (Day in the Country), with two silent works by the Russian expatriate director Dimitrii Kirsanoff, we demonstrate how Renoir’s naturalism evolved from the avant-garde of the previous decade.

During the same period, Sergei Eisenstein struggled to survive in the era of socialist realism under Stalinist scrutiny. Through his highly productive collaboration with Prokofiev, the committed avant-gardist was able to resurrect his reputation with Alexander Nevsky and Ivan the Terrible, two works that reject 1930s naturalism for a stunningly expressive, operatic fusion of music and image.

SummerScape’s film festival provides a celluloid mirror to Prokofiev’s journeys: from Russia to San Francisco and then to Paris before returning to his motherland for good.

All films are screened at the Jim Ottaway Jr. Film Center in the Milton and Sally Avery Arts Center.
All Film Tickets: $8

TRIPLE BILL
Ménilmontant*
1926, directed by Dimitrii Kirsanoff
37 minutes
Brumes d’automne (Autumn Mists)*
1929, directed by Dimitrii Kirsanoff
15 minutes
Partie de campagne (Day in the Country)+
(DVD)
1936, directed by Jean Renoir
40 minutes
This triple feature offers short lyrical studies of the melancholy aspect of love. Ménilmontant is an elliptical narrative of two sisters who, after the murder of their parents, leave the country for a lonely life in Paris. A metaphorical landscape study of rain and drizzle, Brumes d’automne continues the visual experimentation of Ménilmontant with a portrait of a young woman’s mind after she ends a love affair. Day in the Country, Renoir’s minor masterwork based on a short story by Guy de Maupassant, ends with a justly famous study of a summer thunderstorm.
July 6 at 7 pm

Boudu sauvé des eaux+
(Boudu Saved from Drowning)
1932, directed by Jean Renoir
A book dealer rescues a suicidal tramp from the Seine and invites him into his home in order to civilize him—only to watch the ungrateful fellow disrupt his household. In radically transforming a stage play by René Fauchois, Jean Renoir fashioned a classic, humane satire of bourgeois values. Michel Simon delivers a boisterous, shaggy, unforgettable performance as Boudu. Paul Mazursky’s 1986 Hollywood remake, Down and Out in Beverly Hills, doesn’t nearly measure up. 87 minutes
July 10 at 7 pm

Gold Diggers of 1933
1933, directed by Mervyn LeRoy
This is easily one of the most remarkable Hollywood musicals to use the Great Depression as a backdrop and plot element, most notably in the number “Remember My Forgotten Man,” featuring lines of unemployed ex-servicemen. Generally, though, the mood is lighthearted and hilarious, especially when then-newcomer Ginger Rogers sings a chorus of “We’re in the Money” in pig Latin, wearing a costume of dollar bills. Dick Powell, Joan Blondell, and Ruby Keeler star in this dizzy showbiz comedy, choreographed with surreal flair by Busby Berkeley.
96 minutes
July 13 at 7 pm

42nd Street
1933, directed by Lloyd Bacon
A Broadway-bound musical faces all sorts of problems as its tough-minded director (Warner Baxter) whips his players into shape during rehearsals. The leading lady is indisposed on opening night, and an anonymous chorus girl (Ruby Keeler) becomes an overnight sensation when she fills in. In short, every cliché of “the show must go on” variety is here, but portrayed with such conviction and verve that critics have long considered this the apex of the backstage genre. The classic numbers include “42nd Street” and “Shuffle Off to Buffalo,” choreographed by Busby Berkeley. 89 minutes
July 17 at 7 pm

They Won’t Forget
1937, directed by Mervyn LeRoy
Hollywood took on racism without compromise or false optimism in Mervyn LeRoy’s sardonic tragedy, based on a notorious 1913 Atlanta murder case. In a small Southern city, a young white girl is murdered and the cynical, politically ambitious district attorney decides not to prosecute the leading suspect, who is black, but go after an outsider and a Jew. Claude Rains plays the Machiavellian D.A.; Lana Turner makes her debut as the murder victim. The script is by Robert Rossen, whose hard-nosed commitment to social themes would eventually get him into trouble during the McCarthy era. 95 minutes
July 20 at 7 pm

Theodora Goes Wild
1936, directed by Richard Boleslawski
Using a pseudonym, a small-town girl (Irene Dunne in her first starring role) writes Sinner, a salacious bestseller that scandalizes the local prudes. The cosmopolitan New Yorker who did the jacket illustration (Melvyn Douglas) tries to liberate her, only to lose control of what he has unleashed. The antic tone of this highly sophisticated screwball classic paved the way for others. Scenarist Sidney Buchman based his screenplay on a short story by the noted writer and former Bard College professor, Mary McCarthy. 94 minutes
July 24 at 7 pm
July 26 at 5 pm

Midnight
1939, directed by Mitchell Leisen
A down-and-out American girl stranded in Paris is taken in by a wealthy family when she masquerades as an aristocrat. The patriarch suspects her real identity, but plays along because she is the perfect romantic bait for his wife’s gigolo boyfriend. This comedy classic features a superb cast that includes Claudette Colbert, Don Ameche, Francis Lederer, and Mary Astor. The grand John Barrymore steals every scene with surprising comic aptitude. Screenwriters Charles Brackett and Billy Wilder provided the script. 94 minutes
July 27 at 7 pm

Remember the Night
1940, directed by Mitchell Leisen
Preston Sturges penned this underappreciated romance shortly before he graduated to writerdirector in the 1940s, producing a string of comic masterpieces. A straitlaced city prosecutor (Fred MacMurray) takes pity on a hard-boiled shoplifter (Barbara Stanwyck), secures her bail, and ends up bringing her home to Indiana for Christmas. The film’s unique tone is a delicate balance of comedy and romance. 94 minutes
July 31 at 7 pm

La Regle du jeu (Rules of the Game)+
1939, directed by Jean Renoir
A French count invites his friends to his country estate for a weekend of partying and hunting. In tangled, overlapping subplots—reminiscent of Beaumarchais’s play and Mozart’s opera, The Marriage of Figaro— erotic and farcical complications threaten the whole social fabric with disaster. What began as hilarious farce ends as tragedy. Greeted with riots at its first screenings and immediately banned by the Nazis, the work is considered a cornerstone of world cinema that has been much imitated, most memorably in recent times by the late Robert Altman in Gosford Park (2001). 110 minutes
August 3 at 7 pm

Alexander Nevsky++
1938, directed by Sergei Eisenstein
In 13th-century Russia, Prince Alexander Nevsky is called into service to protect his homeland from the Teutonic Knights. Nevsky’s army of hardy peasants repels an invasion at the famous “battle on the ice” of Lake Peipus. Eisenstein resurrected his faltering career and received Stalin’s approval with this outsize hagiography, a patriotic historical pageant, partly modeled on Shakespeare’s Henry V. The project brought together Eisenstein and Prokofiev for the first time in a magnificent collaboration. 112 minutes
August 7 at 7 pm
August 9 at 5 pm

Ivan the Terrible, Parts I and II++
1944–46, directed by Sergei Eisenstein
The first two parts of a planned (and uncompleted) trilogy, this historical epic traces the rise to power of the tyrannical 15th-century tsar who nevertheless unified Russia. Eisenstein’s masterpiece is a bold, quasi-operatic synthesis of actor, costume, décor, and music. As drama, it captures the admiration of Renaissance thinkers for powerful political figures; at the same time, it is a thinly disguised critique of Stalin’s ruthlessness. Though technically incomplete, the two parts offer a satisfying whole; the collaboration that Eisenstein and Prokofiev began with Alexander Nevsky is taken to a higher level. 100 minutes (Part I); 88 minutes (Part II)
August 10 at 7 pm
August 14 at 7 pm