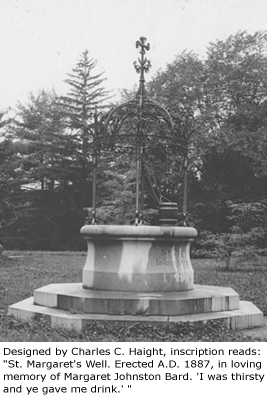 Montgomery Place - Montgomery Place, a 380-acre estate adjacent to the main Bard College campus and overlooking the Hudson River, is a designated National Historic Landmark set amid rolling lawns, woodlands, and gardens, against the spectacular backdrop of the Catskill Mountains. Renowned architects, landscape designers, and horticulturists worked to create an elegant and inspiring country estate consisting of a mansion, farm, orchards, farmhouse, and other smaller buildings. The Montgomery Place estate was owned by members of the Livingston family from 1802 until the 1980s. In 1986, Livingston heir John Dennis Delafield transferred the estate to Historic Hudson Valley in whose hands it remained until 2016, when Bard College acquired the property.

American Arcadia - The American Arcadia project was written in 2011 by staff of Historic Hudson Valley and was supported in part from a grant by the National Endowment for the Humanities. The introduction reads: "The American Arcadia project newly interprets Montgomery Place through the lens of American environmental history, with particular focus on the women who shaped the property. Through rarely-seen images and other resources, the ten parts of American arcadia provide in-depth content and context for the people, landscape, and architecture of Montgomery Place."

History of Bard - provides a concise narrative of important events in the College's history, and describes current programs and initiatives at Bard College.

Heinrich Blücher Project: the Sources of Creative Power Lectures 1953-1954 - This podcast was created by students of Dr. Ringo Rosener at Leipzig University, Germany and is shared here by permission.

"Heinrich Blücher (1899-1970) was an exceptional, admired and controversial teacher at his places of work, Bard College in Annandale-on-Hudson and the New School of Social Research in New York City. For the first time, this website presents the complete lecture series »Sources of Creative Power«, which he gave at the New School in 1953/54, and which has been recorded on audiotapes by his students. Podcasts introduce his lectures by focusing on the main figures Blücher talked about and by which he developed his own philosophical approach in a troubled time of a troubled man."

Horticulture at Bard - articulates Bard's strong commitment to preserving and enhancing the natural beauty of its campus. This site features an interactive garden map, with linked pictures and descriptions of specific gardens, trees, and allees that dignify the College grounds.

Bard Student Newspaper Archive - launched in 2000 by two former Bard students, this site provides access to over 10,000 pages of student newspapers, spanning more than 100 years of Bard's history. As the creators of the site note in their introduction: "Nowhere does one find a more intimate, personal account of Bard's cultural history than in the expressive output of the students themselves."

Bardians in the 1950s exhibition During the summer and fall of 2013, the Alumni/ae Living Room featured Bardians of the 1950s, an exhibit organized by Robert Amsterdam ’53 on the occasion of his 60th reunion. Bardians of the 1950s incorporates materials provided by alumni/ae, as well as on loan from the Bard Archives and Special Collections, that show the wide scope of personal, professional, and artistic accomplishments during and after their years at Bard. The exhibit was curated by Anne Canzonetti ’84, deputy director of alumni/ae affairs, and Helene Tieger ’85, Bard archivist. This online exhibit was adapted from that show.