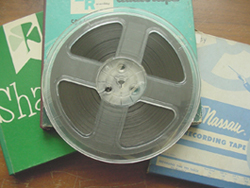 These digital audio recordings are examples of the first that have been created from a collection of more than 100 open reel tape recordings of readings and lectures at Bard over the last 40 years. The collection was established with funds provided by The Carter A. Towbin Poetry Fund in 1982 and first located in Albee before moving to its current home in Olin 101. The Towbin family has been instrumental in supporting the poetry program at Bard including several reading series and a poetry festival organized by Robert Kelly in June, 1987 to celebrate the poets associated with Black Mountain College in conjunction with an Edith C.Blum Institute exhibit "The Arts at Black Mountain College."

The digital recordings included here are among a dozen that have been digitally remastered by Airshow Mastering of Boulder, Colorado. Our ambition is to use the recordings to help tell the story of Bard as an exuberant place for poetry for more than half a century. Forthcoming selections include: Robert Duncan; Ted Berrigan; Robert Kelly; Anne Waldman, and others.

Diane Di Prima was born in Brooklyn in 1934. She began writing at the age of seven, but stated, in 1973, she has been writing "consciously with the knowledge that what I was doing was writing for the past 25 years" (DiPrima, 1973). She has lived in Manhattan and Millbrook, New York. Identified by Allen Ginsberg as "bohemian...radical...[and] mystical" (Ginsberg, dianediprima.com), she was involved with the beat poetry movement, and its influences are evident in her poems. At the time of this reading, she had moved to northern California, and she currently lives and teaches in San Francisco. Art has been of great significance in her life, both as an influence upon her poetry and to her independent work as a photographer and a water-colorist. Her interest in spirituality, both Eastern and Western, is highly influential in her work, especially in her long, epic poem, Loba, which is at the center of this reading.

This reading takes place in 1973, at Bard College. Di Prima's reading voice is neither excessively dramatic nor overly monotonous. She seems to try to strike a balance between the performative and a more formal reading. She allows for short silences at the beginning and ending of her poems, which helps mark a distinction between her banter and the actual poems.

Read more about these Poems


A wonderful 90-minute reading--intimate and playful--by this leading figure of the New York School's "second generation." The event took place in Albee Social on 15 December 1982, only months before Berrigan's untimely death in July, 1983. The recording begins with a wide-reaching, exploratory introduction [nearly 20 minutes long] and includes a lovely translation of Heine and readings of many of the poems from his last book "A Certain Slant of Sunlight," published by O Books, Oakland, California, 1988. As Alice Notley describes the book in its introduction, "[it was] written during 1982 and completed six months before his death in July of 1983...[as] a sequence of poems originally composed on blank postcards each four and a half inches by seven inches." A fuller treatment of the details of the writing and publication of "A Certain Slant" is available from her article in the March/April 1999 issue of American Poetry Review. [Recording used with permission of Alice Notley]


Theodore Weiss taught at Bard from 1946 to 1966. He then accepted a position as Poet in Residence at Princeton, where he remained until 1987. This recorded reading takes place during a return visit to Bard, probably spring semester of 1976 (he says it's been 10 years). The poet discusses being reminded of Princeton upon returning to Bard, and relates a funny story about a group of Princeton students getting in trouble for playing volleyball in the nude. Weiss introduces each piece in elaborate detail. Titles included in this recording are: 1. Preface 2. Into Summer 3. The Fire at Alexandria 4. House of Fire 5. Moral 6. On Stuffing a Goose 7. The Life Of... 8. The Ultimate Anti-Entropy 9. Far Out Far In 10. This Letter 11. The Way it Works Out 12. A Gothic Tale.


A nearly two-hour recording of the poet Paul Blackburn [1926-1971] reading at Bard on December 6, 1968 in Albee Social. The selections are poems published in various books of Blackburn's including: The Journals, edited by Robert Kelly (Santa Barbara: Black Sparrow, 1975); The Omitted Journals (Perishable Press, 1984); Halfway Down the Coast (Northampton, MA.: Mulch Press, 1975); The Cities (New York: Grove Press, 1967); In . On . Or About the Premises (London/New York: Cape Goliard/Grossman, 1968). Includes several selections from his translations of the Provencal poets. Includes his wonderful Pre-Lenten Gestures, a poem for Ed Dorn. Most of the texts are now contained in The Collected Poems of Paul Blackburn, edited, with an introduction by Edith Jarolim (New York: Persea Books, 1985).


A speech delivered outside Albee Hall, March 4, 1968. The bulk of the lecture involves Leary's beliefs about marijuana and LSD use, societal fears about kids "turning on and waking up," and rumors invented by the government about recreational drug use (LSD causes communism, fascism, its a Jewish conspiracy, causes impotence and rape, and "chromosome breakage"). He tells the audience they're going to have to "drop out or cop out...drop out is an internal personal decision...your posture, your inner-stance...detaching from anything meaningless...or that would lead you to continue as a replaceable part." Calls Dutchess county "one of the most reactionary, menopausal, whiskey drinking counties in the Northeast. You have things going on down in Poughkeepsie that make Mississippi look pretty progressive." Finally, says the cops secretly admire what he and his followers are doing, and if he gets them on his side he can "turn on the country."

Annotations for individual Poetry at Bard selections were written by Elizabeth Bryant or Jeff Katz. Special thanks to Elizabeth for all of her work in bringing this collection to life.