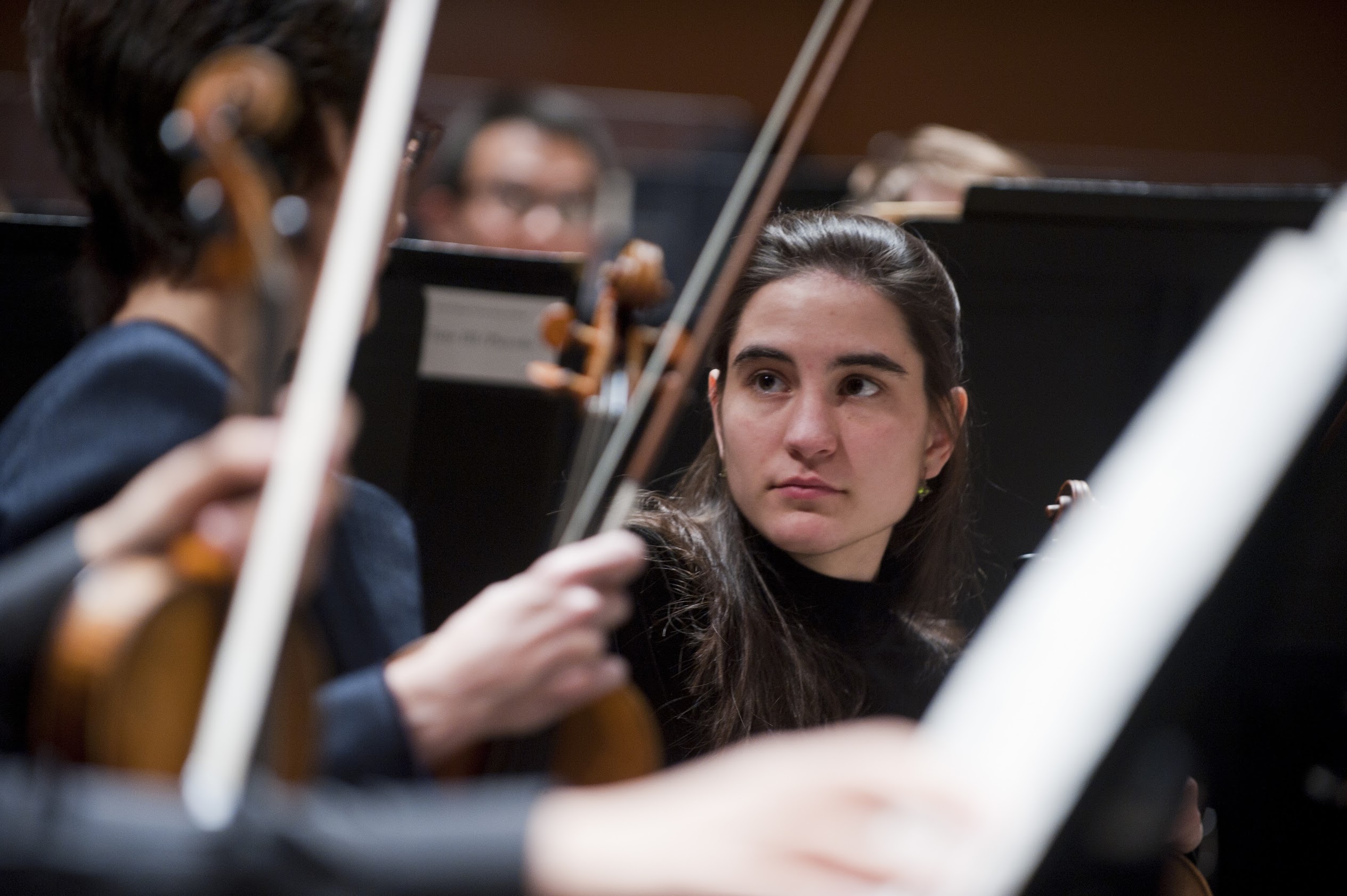 From June 3 to 10, The Bard Conservatory Orchestra will embark on a one-week visit to Cuba to foster cultural exchange. The project includes formal concerts conducted by Leon Botstein in Cienfuegos (June 4), Santa Clara (June 6), and Havana (June 7-9), with pianist Peter Serkin as soloist in Havana (June 9). Collaborations with Cuban artists, in the form of shared concerts, side-by-side performances, and chamber music workshops, are another important component of this concert tour. A side-by-side chamber concert in Havana (June 8) features world-renowned Camerata Romeu, the first all-female string orchestra in Latin America, conducted by Zenaida Romeu. The Bard Conservatory Orchestra will also hold chamber music reading sessions with young musicians at Cuban arts high schools, community music groups, and music schools in these cities. The primary objective of this Cuba tour is to initiate a continuing collaboration, to learn from each other, and to foster student and faculty exchange.

The Bard College Conservatory believes in the power of music and the power of young people to create bonds that will endure and open doors for long-term understanding and collaboration. This summer concert tour combines music and youth as a powerful way to build positive and lasting relationships between the two countries. “With the recent opening up of the United States to Cuba, we see this as an exciting opportunity to establish new ties between our students and the young people of that country,” says Director of the Bard Conservatory of Music Robert Martin. “The tour is happening now, as the pace of relations with Cuba quickens, because we feel we can play a positive role, through music, in affecting the way that the relationship between our counties develops.” Over the past ten years, the Bard Conservatory has established close connections for student exchange and concert tours with China, Venezuela, and Hungary, and aims to foster similar collaborations in Cuba and other Latin American countries, building new ties among Bard Conservatory students, who come from 16 different countries, with the young people of Cuba and Latin America.

Classical Movements, which is a leader in taking the finest ensembles to Cuba for the last 19 years, secured the invitation for the Bard Conservatory to make a multiple city concert tour and play at the same hall in Havana they arranged for the Minnesota Orchestra in their ground-breaking tour to Cuba in May 2015. Says Neeta Helms, president of Classical Movements “ The Bard Conservatory and their acclaimed Music Director, Leon Botstein, making a visit to Cuba with the celebrated American pianist Peter Serkin was of huge interest to the Cuban cultural and educational officials. The collaborations are of special importance.”

The program will include Rossini's William Tell Overture, Hindemith's Mathis der Maler, Brahms' Symphony No. 2. The final performance on June 9 will feature Peter Serkin and the Bard College Conservatory Orchestra performing Bartok's Concerto for Piano No. 3.

ABOUT THE ARTISTS
Leon Botstein, music director, Bard College Conservatory Orchestra
In addition to leading the Bard College Conservatory Orchestra, Leon Botstein is in his 24th year as music director and principal conductor of the American Symphony Orchestra. He established, and is the music director of, The Orchestra Now, an innovative training  orchestra and master’s degree program designed to prepare young musicians for  the challenges facing the modern symphony orchestra. Botstein has been hailed as a visionary  for his programming, creating concerts that give audiences once-in-a-lifetime chances to hear rarely performed works, and inviting music lovers to participate, through talks and discussions, in the creative experience. He is  also artistic director of Bard SummerScape and the Bard Music Festival, now in its 27th year, both taking place in the Richard B. Fisher Center for the Performing Arts at Bard  College, where he has been president since 1975. He is conductor laureate  of the Jerusalem Symphony Orchestra, where he served as music director from  2003 to 2011.

Botstein leads an active schedule as a guest conductor worldwide, and can be  heard on numerous recordings with the London Symphony (including its Grammy-nominated recording of Popov’s First Symphony), the London Philharmonic, NDR-Hamburg, and the Jerusalem Symphony Orchestra. Highly  regarded as a music historian, Botstein’s most recent book is Von Beethoven zu Berg: Das Gedäächtnis der Moderne (2013). He is the editor of The Musical Quarterly and the author of numerous articles and books.

Peter Serkin, piano
Recognized as an artist of passion and integrity, the distinguished American pianist Peter Serkin has successfully conveyed the essence of five centuries of repertoire. His inspired performances with symphony orchestras, in recital appearances, chamber music collaborations and on recordings are equally valued worldwide.

Peter Serkin’s rich musical heritage extends back several generations: his grandfather was violinist and composer Adolf Busch and his father pianist Rudolf Serkin. He has performed with the world's major symphony orchestras with such eminent conductors as Seiji Ozawa, Pierre Boulez, Alexander Schneider, Daniel Barenboim, George Szell, Eugene Ormandy, Claudio Abbado, Simon Rattle, James Levine, Herbert Blomstedt, Rafael Frühbeck de Burgos and George Cleve. A dedicated chamber musician, Mr. Serkin has collaborated with Alexander Schneider, Pamela Frank, Yo-Yo Ma, the Budapest, Guarneri, Orion and Shanghai String Quartets and TASHI, of which he was a founding member.  He has recently performed a duo-piano team with Julia Hsu. They are devoting themselves to both one-piano, four-hands, as well as to two-piano music.

An avid exponent of the music of many of the 20th and 21st century’s most important composers, Mr. Serkin has been instrumental in bringing to life the music of Schoenberg, Webern, Berg, Stravinsky, Wolpe, Messiaen, Takemitsu, Henze, Berio, Wuorinen, Goehr, Knussen and Lieberson and others to audiences around the world. He has performed many important world premieres of works written specifically for him, in particular by Toru Takemitsu, Hans Werner Henze, Luciano Berio, Leon Kirchner, Alexander Goehr, Oliver Knussen, Charles Wuorinen and Peter Lieberson.  Mr. Serkin has recently made several arrangements of four-hands music by Mozart, Schumann and his grandfather, Adolf Busch, for various chamber ensembles and for full orchestra.  He has also arranged all of Brahms’s organ Chorale-Preludes, transcribed for one piano, four-hands.

The 2015 summer season featured engagements at the Tanglewood, Ravinia and La Jolla Chamber Music Festivals in performances of concertos, chamber music, and duo piano programs with pianist Julia Hsu. He travels to Japan to perform with the Tokyo Metropolitan Orchestra and the Osaka Symphony and will give recitals in Tokyo and Shizuoka. Mr. Serkin appears with David Robertson and the Sydney Symphony Orchestra in China following an Australian tour last season.  Within the United States he is soloist with the orchestras of Atlanta, San Antonio and the Traverse Symphony and will perform the Reger Concerto in Carnegie Hall with the American Symphony Orchestra in celebration of the centenary of the composer’s death. European tours bring him to Cologne and Homburg in recital with programs of Josquin, John Bull, Dowland, Byrd, Nielsen, Mozart, Max Reger and Beethoven, as well as the Reger Piano Concerto with the Leipzig Gewandhaus and Dresden Staatskapelle orchestras conducted by Herbert Blomstedt.

She founded the Choir Cohesion that renewed the Cuban choral movement, the Lyric Studio Choir and the Camerata Romeu, that is her main artistic project that adorns the tradition of three generations of musicians Romeu in Cuba Island.

As a teacher, she has taught at the ISA in the chair of choral, orchestra direction and more recently in the chair of Chamber Music. She combines her work with a weekly program which dialogue on various aspects of Cuban music.

She has worked as musical director on the films The Annunciation directed by Enrique Pineda Barnet, Chamaco and  El Premio Flaco by Juan Carlos Cremata, as well as the animated The Ugly and The Moon in the Garden, of the Cross by Adanoe  and Yemely  Lima,  and participated in the feature film soundtrack for Sale, by Jorge Perugorría.

With her own orchestra, Camerata Romeu, was presented at  Duke, Northdrige, Baltimore, and Wake Forest Universities, USF, University of Judaism, as well as in CALART, in the Los Angeles County Museum, Santa Bárbaba Museum and other prestigious centers of culture and art.