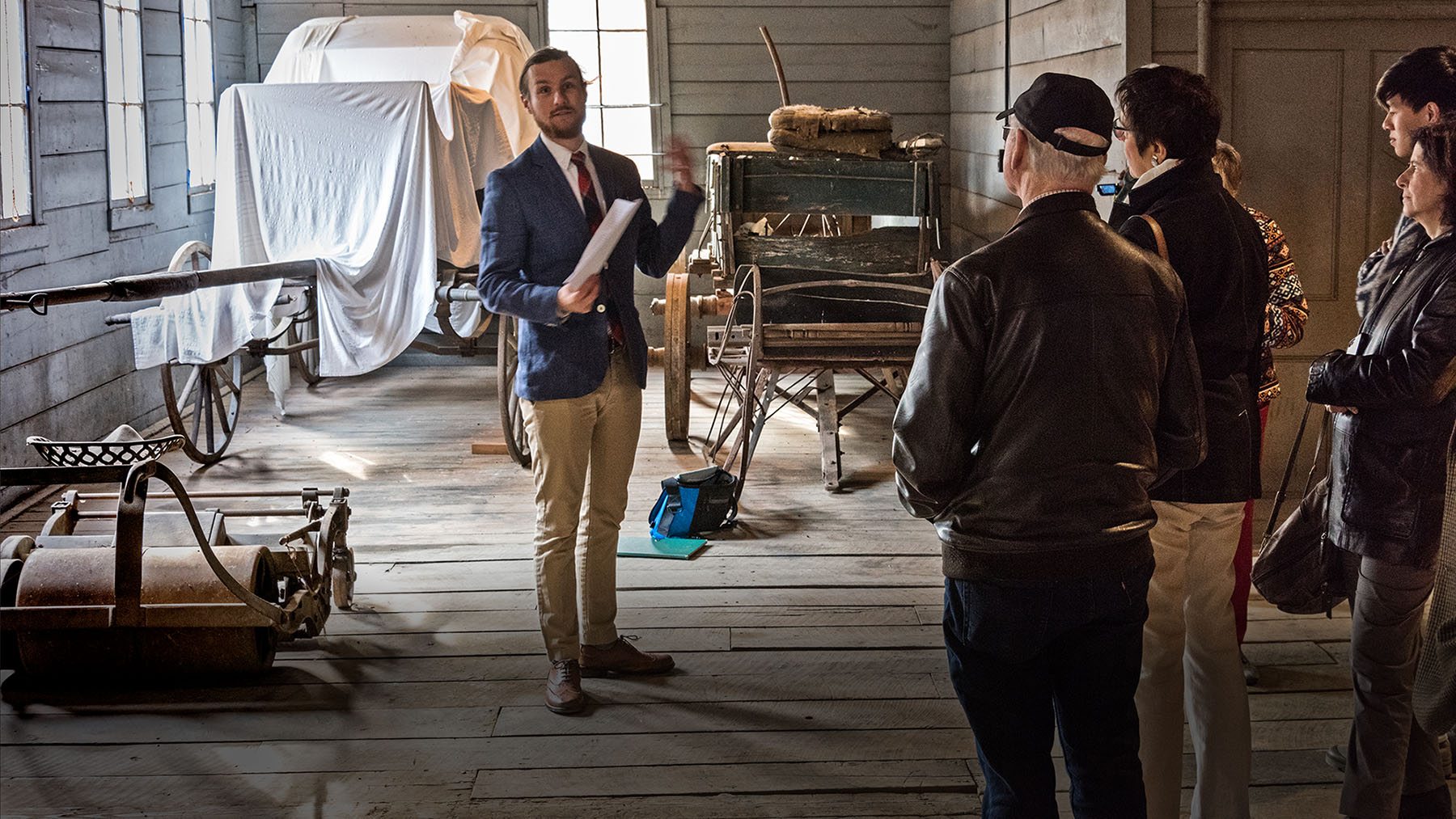 When Bard College acquired the Montgomery Place property in 2016, we began an extensive review and inventory of the collections, archives, and the property itself. Our work going forward is to expand upon the research and resources we have inherited from the previous owners of the property, much of which has focused on the 180-year residency of the Livingston family. We are developing a more robust and inclusive history of Montgomery Place, one that traces its geological past and present, and the development of property ownership on the land. We will look closely at how these themes connect to the largely missing narratives of Native Americans and African Americans. Through staff and faculty working groups, as well as individual course work and research projects by Bard College students, we are embracing a wider view, one that includes themes of ecology, agriculture, human inhabitation, labor history, commercialism, and more. We encourage you to visit our Student Work page to explore recent course projects, and to join us for future public programs and events as we continue to reinterpret Montgomery Place.

Developed in Cooperation with the Stockbridge-Munsee Community

In the spirit of truth and equity, it is with gratitude and humility that we acknowledge that we are gathered on the sacred homelands of the Munsee and Muhheaconneok people, who are the original stewards of the land. Today, due to forced removal, the community resides in Northeast Wisconsin and is known as the Stockbridge-Munsee Community. We honor and pay respect to their ancestors past and present, as well as to future generations, and we recognize their continuing presence in their homelands. We understand that our acknowledgment requires those of us who are settlers to recognize our own place in and responsibilities toward addressing inequity, and that this ongoing and challenging work requires that we commit to real engagement with the Munsee and Mohican communities to build an inclusive and equitable space for all.

This land acknowledgment, adopted in 2020, required establishing and maintaining long-term, and evolving, relationships with the Stockbridge-Munsee Band of Mohican Indians. The Mellon Foundation's 2022 Humanities for All Times grant for “Rethinking Place: Bard-on-Mahicantuck” offers three years of support for developing a land acknowledgment–based curriculum, public-facing Native American and Indigenous Studies (NAIS) programming, and efforts to support the work of emerging NAIS scholars and tribally enrolled artists at Bard.

In 1802, 58-year-old Janet Livingston Montgomery, widow of Revolutionary War hero Gen. Richard Montgomery, purchased the land to create a fashionable country house. In 1804–5, she built a federal-style mansion on the property. Janet’s true passion was for plants and botany, and she established and ran a commercial nursery for fruit trees, shrubs, berries, and seeds. When she died in 1828, her brother Edward and his wife, Louise, inherited the property.

In the 1920s, Violetta and John Ross Delafield (a Livingston descendent) inherited the estate. Violetta, a botanist, created multiple gardens, continuing the legacy of Cora, Louise, and Janet. In 1986, Livingston heir John Dennis Delafield transferred the estate to Historic Hudson Valley in whose hands it remained until 2016,when Bard College acquired the property and a new chapter began.

Montgomery Place illustrates Americans’ changing relationship with nature and landscape over time. As the attitudes of the people who lived and worked there shifted, the estate changed from productive landscape to ornamental showcase to recreational retreat. Today, the Montgomery Place setting functions as a microcosm of American landscape history, from the early wilderness to its latest reincarnation as part of the integrated campus of Bard College. Bard is committed to conserving Montgomery Place’s significant historic and cultural assets as well as preserving its landscape and maintaining its public access and farm.

For an extensive history, visit Montgomery Place: An American Arcadia.