The Architecture and Grounds

The Montgomery Place grounds are open to the public from dawn to dusk on Mondays only through August 13 to accommodate Bard SummerScape programming.

Montgomery Place has incorporated numerous styles of architecture over the years. The original, federal-style, 1805 mansion was built by Janet Livingston Montgomery. In 1841, Louise and Cora, the next Livingston generation, discussed the transformation of the mansion with the architect Alexander Jackson Davis, marking the start of a program of design and construction that would span 30 years. The mansion is considered Davis’s finest neoclassical country house, significant for both its design excellence and its rarity. Other Davis-designed buildings on the property include the coach house, farmhouse, and Alpine-style Swiss cottage. 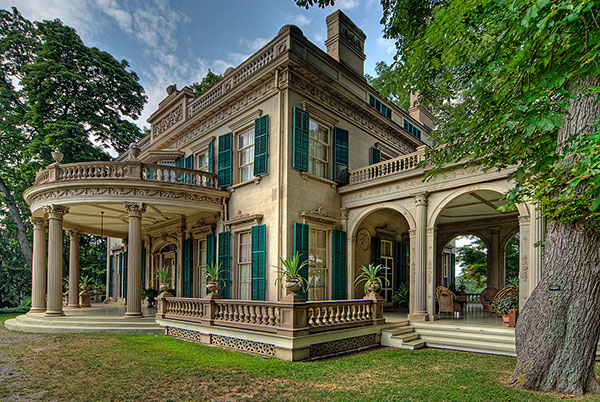 Originally built in the federal style, the mansion was completed in 1805 under the direction of Janet Montgomery Livingston. Renowned 19th-century architect A. J. Davis redesigned the mansion in 1840 and again in 1860 in the classical revival style. Workers first built the two-story house out of local fieldstone and covered it with a smooth stucco finish. The structure’s symmetry reflected the design values of the era as a separation from the surrounding landscape intended to keep nature under control and at arm’s length. A. J. Davis added two additions on each side of the house and repainted and sanded the wood mansion to look like cut stone.

The additions—particularly the large open porch on the north side—helped to integrate the house with its surrounding environment, reflecting America’s growing embrace of nature as a source of inspiration. In the 20th century, the last generation of Livingston heirs was again interested in transforming the house to fit with the current colonial revival style. They painted the house a creamy white with light green shutters in the 1920s and were the first to bring indoor plumbing, electricity, and heating to the estate. The mansion’s exterior is currently restored to its 1860s appearance. 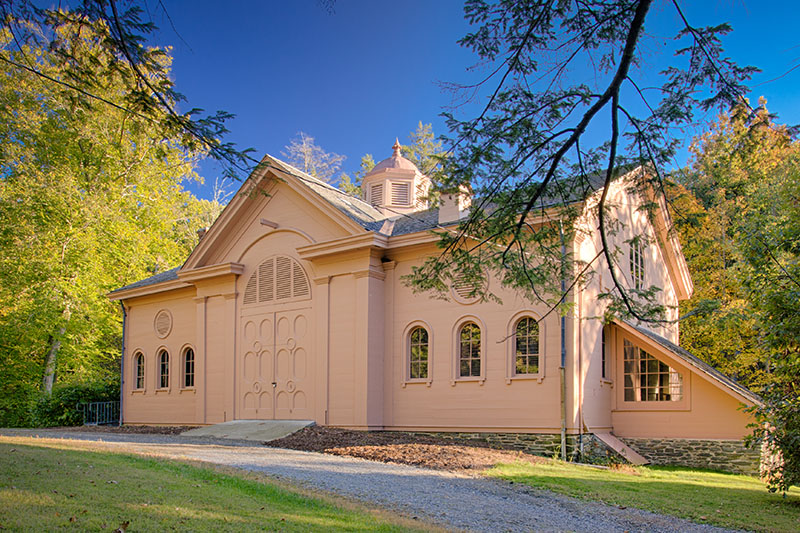 Louise Livingston built the coach house (or carriage house) in 1860. This is one of the four buildings on the property designed by well-known New York City architect A. J. Davis. In this era, coach houses were built as essential features of upper-class estates and served as high-status buildings that accommodated valuable horses and expensive painted coaches and leather tack. With the arrival of the automobile, the coach house was transformed into the family garage and an apartment upstairs was added for the family chauffeur. 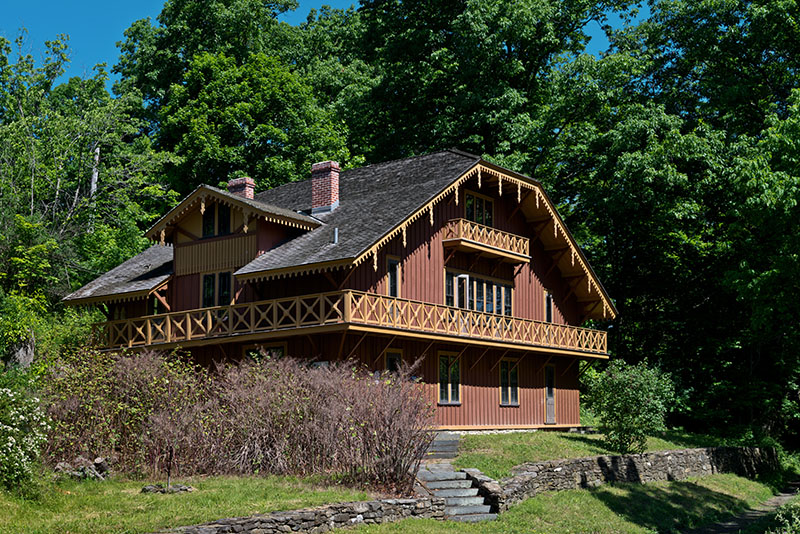 Noted American architect A. J. Davis designed the Swiss cottage, originally known as the Swiss factory lodge, in 1867. This building is the only surviving Davis structure built in the Swiss style. For its time, it would have been unusual for a celebrated architect to design a structure that was intended for working class men and their families. Davis’s original cottage drawings are in the collection of the Metropolitan Museum of Art. 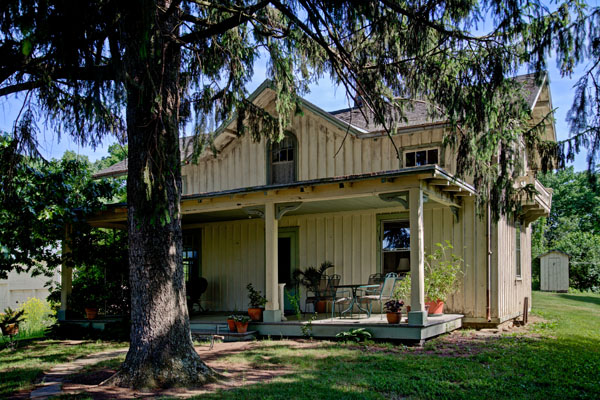 In 1861, Cora Livingston hired A. J. Davis to build a farmhouse on newly acquired land adjacent to the original property west of the mansion house. The neighboring barns were built first and later, together with the farmhouse, established a separation between the formal and functional areas of the estate. An existing farmhouse, now known as Spurr cottage, was relocated and set into a bank on River Road and the new Davis-designed farmhouse was constructed on the top of the hill nearer to the barns. 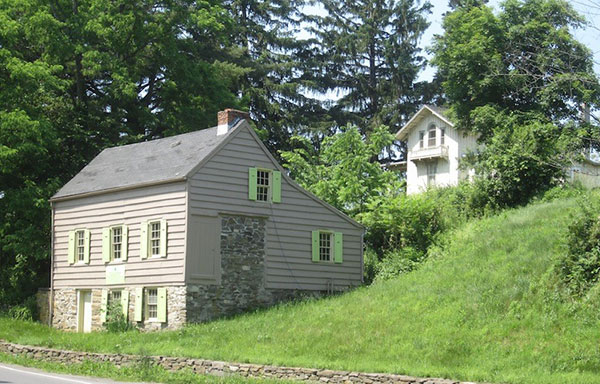 Both 19th-century wood-framed and clapboard structures, the cottages were built for residential purposes to house families and workmen employed at Montgomery Place. They are built into the hillside overlooking the Sawkill, the local mill stream. The smaller of the two, Spurr cottage, has a gable-roofed structure. 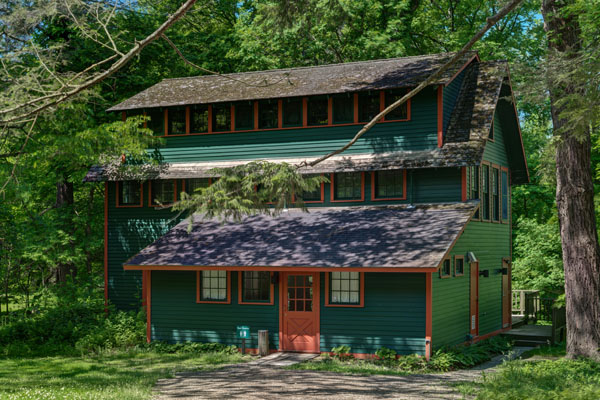 This structure was built in 1928 by the last generation of Livingstons, the family of John Ross Delafield and his wife, Violetta White Delafield. The Delafields were passionate believers in the value of outdoor activity and of sun and fresh air. It was during this time in the 1920s that they built the squash court along with a tennis court and added a screened sleeping porch to the top of the mansion’s north pavilion. In the 1940s, the building was converted into a “camp” to house the various guests and family members that came to visit. Today, the squash court building houses the Bard Prison Initiative program.

The property’s basic layout and contours have remained constant throughout most of the estate’s existence. Apart from formal gardens and manicured lawns, 45 acres of farmland and 235 acres of woodlands stretch from the Hudson River to the front of the property on River Road. Much of the property’s original 19th-century design remains, as well as gardens, water features, and trails from the early 20th century. Exceptional vistas include the Hudson River and Catskill Mountains, the rushing waters of the Sawkill’s lower falls, and the 80-acre South Woods forest. Montgomery Place’s orchards and agricultural land are another vital component of the site’s heritage and appeal.

Many individuals worked on the landscaping of Montgomery Place. Edward Livingston and his wife, Louise, second-generation heirs to Montgomery Place, laid out several walking trails while their daughter, Cora Livingston-Barton, designed many of the formal and rough gardens with the help of one of America’s best-known landscape designers, Andrew Jackson Downing. A third-generation Livingston, Violetta White Delafield, added the current formal and rough gardens in the 20th century. 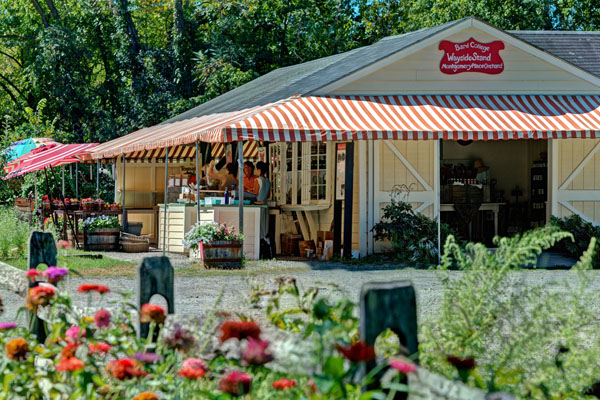 In the 1930s, as the automobile made travel through the countryside more accessible, farmers began pulling wagons up along the road to sell their produce. Montgomery Place's fourth-generation Livingston, Violetta Delafield, decided to establish her own roadside market, called the "wayside stand," which she "intended to spread a good example of good taste so badly needed where goods were sold along the highways." The resulting building was displayed at the 1935 Dutchess County Fair, and still to this day is a beloved provider of local, homegrown fresh produce and related packaged farm goods. 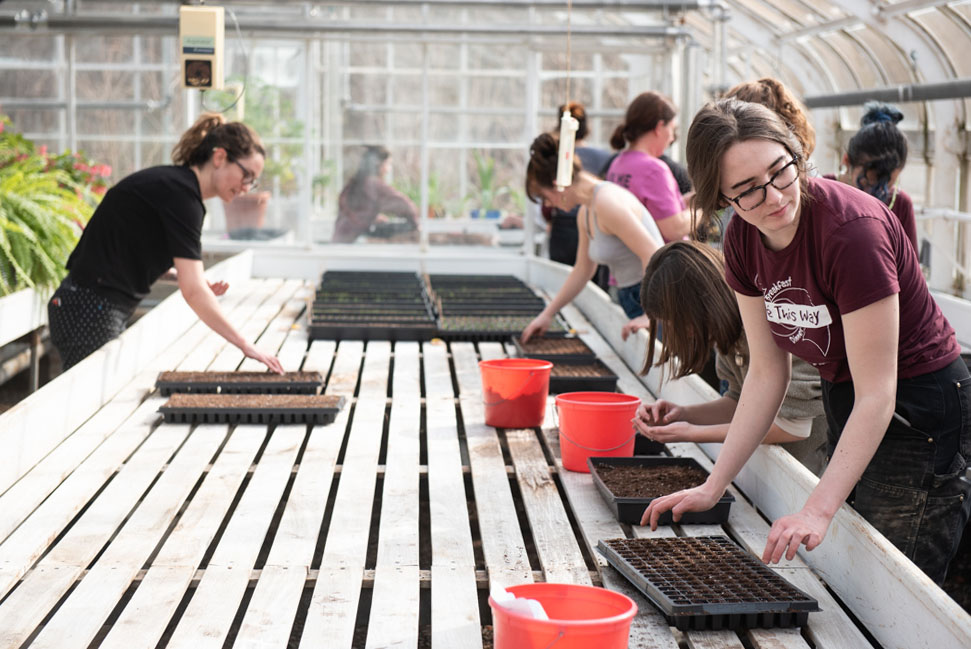 Since its construction in 1929 by Hitchings and Company, this building has continually operated as a working greenhouse. The firm was founded in 1844 and was the most important greenhouse builder of its time. Inside are long benches that hold plants during the cool seasons.  Pipes near the floor heat the greenhouse through the circulation of hot water. The building’s prominent placement in the formal gardens shows that it served a serious connoisseur of plants. Unlike the original ornate conservatory that was a showplace for the second generation of Livingstons, this structure was first and foremost a workspace. It was in this building that the last generation and their gardeners cultivated plants for the gardens and house. Today, the greenhouse supports the work of Bard College’s horticulture department, Bard Farm, and Bard Prison Initiative programs. 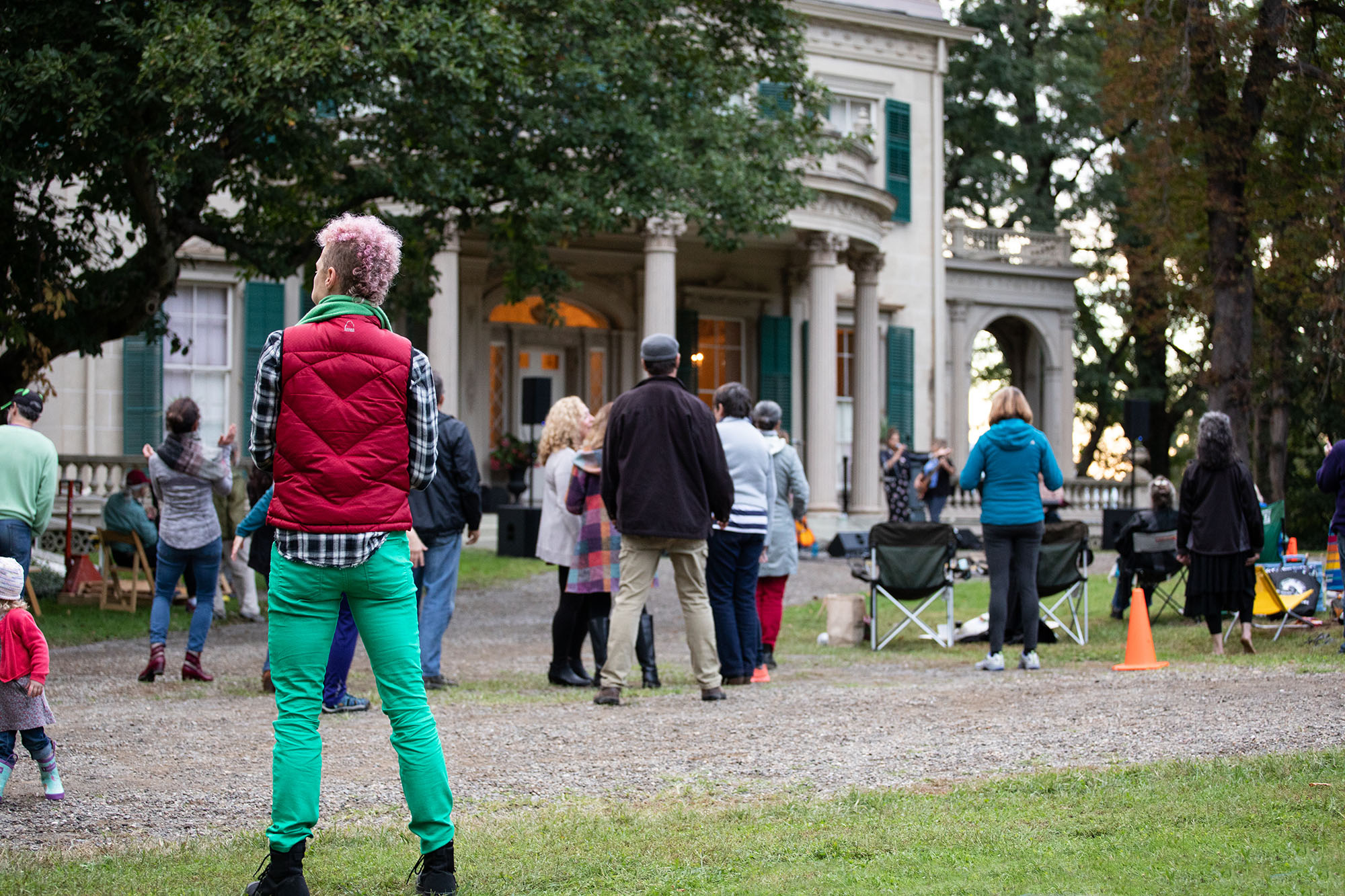 Picture Yourself at Montgomery Place